It's small-town Iowa a few years after the turn of the last century, and the stubborn but sincere residents of River City are enjoying an age of innocence, gossiping among themselves, relying on the Wells Fargo wagon as their link to the outside world and worrying about the unsavory influence of a pool hall on their wholesome young people.

When con-artist-turned-conductor Harold Hill arrives in town promoting a boys band, the townspeople enthusiastically embrace the idea, all except for Marian, the librarian, who sees through Hill's smooth-talking scam.

With such well-known songs as "Trouble," "Marian the Librarian," "Wells Fargo Wagon" and "Gary, Indiana," "The Music Man" is one of the most-beloved musicals of all time.

Willson was born and raised in Mason City, Iowa. After learning to play the flute as a child, he went on to become a flute and piccolo player with John Philip Sousa's band. At the urging of several people who suggested he write a musical comedy about Iowa, Willson worked for six years on a script with more than 30 revisions and 40 different songs before "The Music Man" originally opened on Broadway in December 1959. The show, starring Robert Preston and Barbara Cook, ran for 1,375 performances and won eight Tony Awards, including the coveted Best Musical Award. The movie, which starred Robert Preston and Shirley Jones, also won an Academy Award for Best Score.

More than 45 years after its original debut, "The Music Man" still enchants audiences with its memorable songs and undeniable nostalgia for life in a simpler time. This Big League Theatricals, Inc. production is based on Susan Stroman's direction and choreography from the highly successful 2000 Broadway revival. 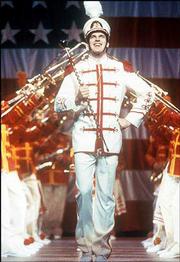 Meredith Willson's "The Music Man" will march onto the Lied Center stage at 7:30 p.m. Saturday.