One thing that always annoys me about other flight combat games is the juxtaposition of great flying mechanics with a poor sense of attack, marred by pitiful explosion animations like in Ace Combat 4. Flight combat snobs, your game has arrived in an alternate 1930s universe dubbed Crimson Skies. 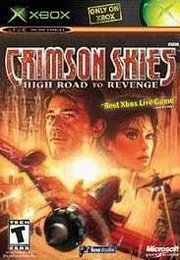 Crimson Skies sports uber-tight control over your machine and an awesome sense of accomplishment after shooting each and every plane down with pinpoint destruction of your enemies. If you hit their right wing, it will break off. If you fire a missile straight for the cockpit, the explosion and particle-flying will react accordingly. This may sound like technical nitpicking to most, but most may not realize how much this attention to detail adds to the overall fun factor and staying power of the game.

Most of your missions in the single player campaign consist of protect cargo, clear all enemies, race and destroy the base. You complete missions to gain tokens and advance the story. These tokens can be used to upgrade your plane, making it faster, making weapons more potent or increasing defense. There are several planes to find or unlock in the long single player campaign.

Later on when enemy AI gets better, your survival is dependent on how well you perform your evasive special maneuvers. To turn around quickly you can smash on the brake and hang left for three seconds, but by clicking the right analog stick, then moving it up and the left one down, you'll perform a snap turn automatically. Many different moves like a power climb, barrel roll variations and snap turns can be performed by using different combinations of the two analog sticks succeeding the click of the right analog stick. It takes a short minute to get used to the feature but is incredibly useful in tight dogfights.

Multiplayer modes range from dogfight to variations of capture the flag with a chicken (yes a chicken). A game with such tight dogfighting controls begs for online play...and that you get in the robust features on Xbox Live.

The graphic engine supports impressive draw distance and some great textures complimenting the great architectural set pieces and level layouts. And if you didn't catch this before, the explosion animations are killer. The Dolby Digital surround isn't as immersive as it should be, given the common occurrences of planes whizzing by repeatedly but it does to a fair job with the great sound effects the game has.