Nashville, Tenn. — A diverse lineup of country and rock performers paid tribute Monday to the late Johnny Cash, performing many of his songs and recalling him as an original, independent voice in popular music.

Standing under a large image of Cash and singing her father's "I Still Miss Someone," Rosanne Cash opened the show at the Ryman Auditorium, former home of the Grand Ole Opry.

Actor Tim Robbins was master of ceremonies for the show.

Sheryl Crow performed "Hurt," a song about drug addiction that Cash recorded in 2002. The song, written by Trent Reznor of the rock group Nine Inch Nails, introduced Cash to a younger generation of fans.

"When he gave his voice to something, he dedicated his voice and his intellect," Crow said.

Cash died Sept. 12 at age 71 of complications from diabetes.

His stepdaughter, singer Carlene Carter, said Cash told her when she was young that it was better to be one-of-a-kind than one of many. 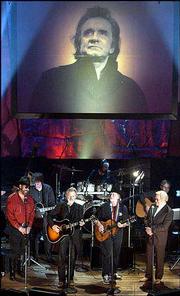 Hank Williams Jr., left, and George Jones, right, perform with the two remaining members of the Highwaymen, Kris Kristofferson, second from left, and Willie Nelson during the Johnny Cash Memorial Tribute. Cash was a principal element in the original Highwaymen along with Nelson, Kristofferson and the late Waylon Jennings.

Carter said the family has struggled through a difficult year with the death of her mother, June Carter Cash, in May, followed soon after by Cash's death. Last month, Carter Cash's daughter died of carbon monoxide poisoning.

"This is truly a tribute," she said of the concert. "It's a way for us to celebrate the music they brought to the world."

Bono, lead singer for the rock group U2, toasted Cash with a pint of Guinness beer in a recorded message. He said that whenever Cash landed in Ireland, the first thing he did was have a pint of the Irish stout.

Tickets were free and distributed by lottery. More than 2,000 people attended the show at the Ryman, which was built in 1892 for church revivals and is still known as the Mother Church of Country Music.

"Cash was one of the very, very few people in American popular music who truly was unique," said Paul Wells, director of the Center for Popular Music at Middle Tennessee State University. "Cash transcended genre right from the get-go. And, perhaps more significantly, he maintained that kind of strong, individual identity throughout his entire career."

"I'd bet that there are millions of Americans who would never describe themselves as country music fans but know who Johnny Cash was," Wells said. "They may or may not know much about his music, but they know about his ABC-TV show, his prison concerts, and maybe can sing a phrase or two of 'I Walk the Line' or 'Ring of Fire' or 'Folsom Prison Blues."'