In the end, Mario Kart: Double Dash is a very fun update to the series but you won't escape the feeling of sorrow when you come away from multiplayer modes slightly disappointed.

Mario Kart: Double Dash is about to race onto store shelves next week as Nintendo's flagship title to carry it through the holiday season. Nintendo prides itself on being one of the last innovators in gaming, not releasing rehash after rehash. After playing through Double Dash I must say even though the game is fun, Nintendo officially can't make such a claim any longer. 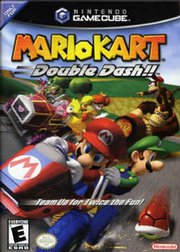 For those of you wondering if it is as fun as Mario Kart 64, it purely depends on what about the predecessor you found most fun. If you found the racing modes to be the most fun, you will most likely find Double Dash incredibly fun. If you are looking for innovation on the multiplayer battle arenas, you are better off blowing the dust off of the N64. Yes, I can hear your cries now. I am as disappointed as you are.

First, let's get to the good. Nintendo has this kart-racing niche owned. The gameplay mechanics are tight and intuitive, even performing the new drifting skids to get a small added turbo boost. This time around, you have two characters to choose from to pilot your kart. Choosing the right combination can have serious advantages when battling on the tracks. One guy drives while the other picks up the weapons to use them. You can even team up with a friend to ride the same kart and double up on weapons. It's a nice touch but really, it adds very little to the old formula.

There are also new weapons that are character-specific that add another nice touch, but again, there is a pervasive sense of familiarity throughout the fun experience.

Like I said previously in my impressions, I was fairly apprehensive at the sense of speed all the critics were cautious about. Nintendo promised to speed it up and yes, even after playing F-Zero GX to death, the lowest speed class in Double Dash can still give a little rush. Once I learned how to drift for that speed boost I breezed through the three main cups at 50cc. And the 100cc class does provide an elevated challenge. You must really get good at drift boosting, learning the few shortcuts and being VERY liberal using your weapons. When the 150cc class hits, you better have these skills perfected or you have no chance.

Battling through the races feels more intense than the previous Mario Kart on the N64. I was quite impressed. The tracks are designed more for battle than speed racing which is fitting for a Mario Kart game. And luckily the unlockable cup has four new tracks that have inspiration fairly void from most of the regular tracks.

Unlike previous Mario Karts, the most fun multiplayer mode is racing the tracks against friends, even on a LAN. Since the battle sense has been amped up, it does make for an awesome time.

The other multiplayer modes are a keep-away type game with a "shine" which you try to hold for 55 seconds. Then there is the regular battle mode where you get hit three times and you're out. Finally there is a b-bomb match where all weapons are bombs and you have to get four points to win, but when you get hit, you lose a point. All three modes were fun at first but my first impression of the multiplayer stages was pretty average, if not slightly disappointing.

I was even more disappointed to learn that the unlockable battle arenas lacked any creativity, seeming like a mere afterthought. I remember the rush I felt racing my way to the top of a tower in Mario Kart 64 to fire a heat-seeking turtle shell in the direction of my foe, celebrating the sense of victory when it barely caught the end of his kart. The arenas do not accommodate or facilitate this type of situation and you are left with a somewhat stale experience that leaves a disappointing gap in the overall package.

The graphics fit the purpose, with shiny Mario-esque recreations from the lands of Nintendo's mascots. Nothing is out to knock you over and it probably won't. The sound is greatly separated in Dolby Pro-Logic II with awesome, warm use of the subwoofer channel if you can believe it.

In the end, Mario Kart: Double Dash is a very fun update to the series but you won't escape the feeling of slight disappointment. The single player mode is great fun and is most rewarding if you unlock the fourth cup. If you were looking for a robust multiplayer experience, you will find joy in the racing but not in the arenas.