Artist and Lawrence native Barry Coffin carries with him a portfolio that doubles as a scrapbook.

Inside are photographs of the ceramic sculptor's whimsical American Indian figures, which have evolved over time from bold-featured, cloaked warriors to sometimes featureless, limbless suggestions of the human form.

Also tucked inside are snapshots of Coffin arm-in-arm with celebrities like Carlos Santana, Hunter S. Thompson and Steve Miller, who owns at least 40 of Coffin's sculptures. The funniest photograph is a signed, black-and-white shot of a buckskin-clad Coffin giving bunny ears to Peter Fonda, whose tongue is hanging out.

The photo collection is good for reminiscing, but it represents a life Coffin has all but left behind, he says.

"I did a private show with Hunter S. Thompson up in Aspen. I've met Santana several times, been to a lot of his concerts. He's got one of my sculptures. I've done all that -- the fame part -- and it was cool, it was great, it was a blast. But now I'm beyond that and don't need that anymore," Coffin says.

"Now I'm just focusing on my art and letting it go wherever it's supposed to go and not worrying about it."

A few months ago, Coffin's let-art-lead-the-way policy lured him from Taos, N.M., back to his hometown, where he's teaching ceramics at Haskell Indian Nations University, waiting to begin a stint as artist-in-residence at a yet-to-be-opened ceramics studio connected to Bill Kurtis' Art of the Prairie Gallery in Sedan and helping to raise money for a sculpture honoring Haskell war veterans and their families.

As part of the fund-raising effort -- and to draw more attention to the relatively new Haskell Cultural Center and Museum -- Coffin is showing 14 of his sculptures through January at the center in an exhibition called "Indian Art in the New Millennium." He'll donate a portion of the proceeds from sales to help pay for the sculpture. 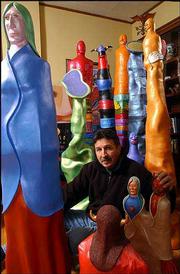 American Indian artist Barry Coffin recently moved back to Lawrence and is the first artist to show work at the Haskell Cultural Center and Museum on the Haskell Indian Nations University campus. He's pictured among his colorful ceramic sculptures.

Coffin might rightfully be called a native son of Haskell.

Now a nationally known artist with dedicated collectors and work in museums nationwide, Coffin literally cut his teeth on the campus of what was then Haskell High School. It was the 1950s, and Barry's father, Tony Coffin, was coach and athletic director. Coffin Sports Complex is named for the elder Coffin, who coached American Indian track star Billy Mills.

"He used to baby-sit me and my brothers when we were kids," Barry says of Mills. "I grew up right on the campus, lived there until I was 19 and got drafted and went to the Army. We had some great times. It was a cool place."

Coffin, who is of Potawatomi and Creek descent, attended Cordley and St. John's Catholic schools, Central Junior High and Lawrence High School and remembers art being his favorite subject.

"I always got A's," he recalls. "Back then, nobody ever encouraged you to be an artist or told you that you could make a living at art. So after I got out of high school, I didn't even think about it."

Coffin didn't enroll at the Institute of American Indian Arts in Santa Fe, N.M., until he was 27, after serving two years in Vietnam. He quickly abandoned his intentions to throw pots and became enamored with handbuilding ceramic sculptures. He befriended top Indian artists of the time -- people like Kevin Red Star, Doug Hyde and T.C. Cannon -- and started doing group shows with them right out of school.

"I was hanging out with those guys and learning from top Indian artists right off the bat," he says. "I got a really good education, not only from the art school, but also from artists. I got to see Indian art, the whole movement."

Coffin won two blue ribbons in the first juried exhibition he ever entered, at the Heard Museum in Phoenix.

"They said they never do that, but the only reason I got two blue ribbons was because the two pieces I did were so different that they thought different artists had done them," Coffin recalls.

Barry Coffin's sculptures have gone in new directions since 2000, when he grew bored creating strictly Native-looking art in the studio and started making pieces in what he calls his Plants from Other Planets series. Examples like the ones pictured here are intermingled with contemporary warrior figures in his exhibition at the Haskell Cultural Center and Museum called "Indian Art in the New Millennium."

Since then, he has amassed a handful of collectors, and his work has been shown in museums from the Southwest to the Smithsonian.

"I like his work a lot because of the connection to native history, but also a lot of his pieces have a real sense of humor about them that I think is really unique," says Bobbi Rahder, archivist/curator at the Haskell Cultural Center and Museum.

Coffin constructs his sculptures by rolling out coils of high-fire stoneware and then joining and smoothing the pieces into hollow figures, some as tall as 7 feet.

He fires them without glaze and then paints them with acrylics. His color palette has grown more vivid over time, and his latest two series -- Plants from Other Planets and Ancient Warriors -- glow in shades of magenta, blue, green and gold that seem illuminated from within.

The change in his work came three years ago.

"I'd been doing Southwest and Indian images for 20-some years, and it was sort of hard to go to the studio. It became like labor, you know," Coffin says. "I wasn't enjoying it anymore. So I decided I just wanted to do something totally different. That's when I started doing these Plants from Other Planets."

The curvy organic forms often incorporate negative space and almost always include an open, heavily textured face that seems to be reaching for nourishment.

"I'm taking Indian art to the next level, showing that Indian art doesn't have to look Indian," he continues. "It can be anything. Indians can make anything they want."

He figures people who visit his show at the cultural center will be surprised to see his contemporary sculptures juxtaposed with the historical images of Indians and Haskell on long-term display.

"It's not going to be what they're expecting to see, which is good," Coffin says. "That's how you educate people is doing new things and exposing them to them. ... I want to educate Lawrence people, too, on what Haskell is. ... A lot of people who live in Lawrence never go out to Haskell."

Rahder shares Coffin's hope that his artwork will draw more people to the center in general, and if a few pieces sell and help bolster the veterans memorial fund, all the better, she says.

Coffin created the design for War Mother, which will be a 6-foot-tall female figure in bronze, her hands folded in prayer. Once he and the Haskell Veterans Assn. raise $25,000, Coffin will create a mold for the statue and have it cast at Heartland Bronze.

"I love the War Mother memorial sculpture because she really does embody the sacrifices that mothers of veterans have provided to this country," Rahder says. "He's (Coffin's) just been very good to our museum and very good to Haskell."

Coffin is the first artist to show work at the center, which opened in September of 2002.

"I think this is perfect," he says. "I grew up here, and now I'm going to be the first artist to do a show at the museum, which is a great honor."