Artwork to honor spirits of people living with AIDS

Tanya Hartman came of age at the same time as the AIDS epidemic.

"In 1983, I think, the virus was labeled as the AIDS virus," she says. "I was in college at the time, which is when you're trying to construct your own sexual identity and experiment, and it seemed so tragic to me that people were dying from sexuality, from such a human expression of self. I'd see people in New York on the subways who had Kaposi's sarcoma lesions, and it was so terrifying to me to see how people in the subway moved away from them, as if they were pariahs."

Part of what's so disturbing about such images of prejudice, Hartman says, is that people with HIV/AIDS aren't defined by their diagnosis.

"Nothing's compromised in their spirit," she says. "They can love and experience sexuality and joy and even parenthood these days with medication."

Those essential human experiences are what Hartman, associate professor of art at Kansas University, hopes to capture in a public art project that eventually will connect people with HIV/AIDS from Lawrence to Harlem, N.Y., to Johannesburg, South Africa. The text-based piece will be composed of the words of HIV/AIDS interview subjects in their own handwriting, responding to the general questions "What was first?" and "What was last?"

After scanning the answers into a computer, Hartman will cut out each word and affix it to the surface of paper that she has hand-stitched in blue and red thread to resemble a child's notepad. The words will be covered with layers of gesso (a translucent, acrylic painting medium) and then reapplied, then covered with Gesso and reapplied until they seem to emerge organically from the surface of the paper.

Each interview will yield two sheets of 8 1/2-by-11-inch paper -- one for each answer. Once each section is complete, the entire collection of interviews -- Hartman hopes to conduct about 90 -- will be joined together with zippers, buttons and hook and eyes to form an embroidered scroll.

"When you unzip the zipper or unhook the hook and eye, you'll be able to peel it back and see a field of cellular forms, and each one of the forms will hold one word from the constructed answer. Even under that layer will be smaller structures, each filled with one letter. Ultimately, it will be like a 90-foot-long sea of cellular forms and words," Hartman says.

But first she needs people. So when she's not working on other art projects or teaching at Kansas University, where she was just granted tenured, Hartman is attempting to make connections with people living with HIV/AIDS. She recently spoke to the support group at Douglas County AIDS Project. She'll also display a piece of artwork next Sunday at the DCAP annual art auction, where she'll be jurying the auction's new high school competition. 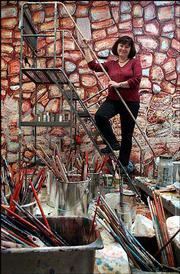 Tanya Hartman, associate professor of art at Kansas University, is working with the Douglas County AIDS Project to meet people living with HIV/AIDS who are willing to be interviewed for a public art project. She also will be jurying the high school competition at DCAP's annual art auction, where she will exhibit an example of her work. Hartman is shown Tuesday in front of another of her pieces, "A Tall Wall Surrounds Me."

"I'm just trying to make a presence. I'll do anything," Hartman says. "I expect eventually people will contact me and we'll begin."

The idea for "Zipped Narrative" originated in New York, Hartman's home state. A pastor at St. Mary's Episcopal Church in Harlem saw some of Hartman's stitched work at New York's A.I.R. Gallery and asked if she'd make a piece for the church. When she realized the church ran a clinic for HIV/AIDS patients, she decided to incorporate the subject into a scroll that could be displayed in the church.

Her plan for the finished piece -- it all depends on funding -- is to unzip it and display sections of it in rest areas along U.S. Interstate 70 from the Colorado-Kansas border all the way to New York City and then in several South African venues before finally giving it to the Harlem Church.

The rest stop displays would stand alone, without any explanation that the project is based on the lives of people with HIV/AIDS. Instead, each stop -- about three in each of the seven states along the way -- would include a Web address where people could go and enter their own experiences of mortality into a Web-based scroll.

"So I'm hoping that it would transcend a particular diagnosis and become a meditation on just what it feels like to be human and stuck in a body with a spirit and that strange dichotomy," Hartman says.

From introspection to investigation

When Hartman came to KU in 1997, she painted, and the work was strictly autobiographical. Slowly, she began to embed words into the surfaces of her paintings. One whole wall of her fifth-floor studio in KU's Art and Design Building is occupied by a 24-foot-long oil painting caked in gruesome, fleshy tones of paint with thick, goopy letters that represent personal memories emerging from the surface.

During the painting's evolution, and as Hartman traveled to art exhibitions and conferences, she took up sewing.

"I really liked the tactile quality of the stitching in juxtaposition to the tactile quality of the paint because it seems to me like memory is something that would be both embellished -- because we tend to construct things that we want to remember, so I like to make the surfaces of my work embellished -- but also layered and encrusted because we have so many different layers of perception," she explains.

The work-in-progress that's most like "Zipped Narrative" is called "What Was Beautiful?" When complete, it will consist of 365 squares, each containing the answer to the question Hartman asked herself every day for a year: "What was beautiful today?"

But Hartman's been about as introspective as she'd like to be for awhile.

"I thought it would be interesting to hear what other people had to say about their lives," she says.

'Ministry to the human spirit'

Summers, director of the Douglas County AIDS Project, fell in love with Hartman's idea the moment she heard it.

"I met with her at one of the bakeries downtown one day, and we just sat there -- I think we ended up being together for three hours," Summers says. "What I've told Tanya is it is going to take a little bit of time to build that trust (with HIV/AIDS patients). Even in our community, HIV is still stigmatized to the point where we have folks who are out about being gay but not out about their status. It's just a real scary place."

So far, Hartman's only talked to two people, both of whom are acquaintances. She says their writing was creative and personal and that they seemed interested in having their words "zippered into this little communal context."

"I think people have an urge to tell their stories," she says. "And I think our culture moves so fast that people don't just sit down and talk anymore, and I think there's a yearning for that."

"I guess I want the project to be about spirit -- how we aren't what our bodies are and how we're all really the same," she continues.

"I just got tenure, and I feel like I can turn my attention to what I've always thought art should be. I really believe art is a ministry to the human spirit," she says. "I feel it's the artist's job to tell the truth about the human condition in some way, if you possibly can. That's a hard thing to do, but you just try."