E.M.U. Theatre to bring Poe's works to the stage -- finally

It has been more than a year in the making, but at last E.M.U. Theatre is ready to bring "And Much of Madness" to stage.

Originally scheduled to open in the fall of 2002, the show has been kept on the back burner until now because of injuries and actor conflicts.

"I initially conceived of a production like this about five years ago," says director and co-writer Todd Schwartz. "The work for this actual production began about a year ago."

The play, a collaborative effort of a dozen writers, is the product of various excerpts from poems and short stories by writer Edgar Allan Poe. The script weaves these excerpts with vaudevillian skits and dance numbers from a chorus in the Greek tradition and aims to create a tone that combines elements of classic literature, horror/science fiction and modern comedic irreverence.

"The action takes place within the context of a talk show," Schwartz says. "The talk show is woven together from three of Poe's works: 'The Facts in the Case of M. Valdemar,' 'The Conqueror Worm' and 'The Mask of the Red Death.'"

At first glance, the works of the austere wordsmith may not seem appropriate material for a show comprised of such whimsical elements, but Schwartz finds inspiration in both Poe and his literature.

"Part of the inspiration came from Poe himself," he says. "Poe was not without a sense of humor. He had a very dry wit."

"He deals with moods, environmental stimulus, word color, things layered, etc.," he continues. "Things like that tend to lend to theatrical creation."

The show, with a cast of 11, attempts to illustrate for the audience the frustration of the artist who has grand intentions but is constantly met with adversity. The production utilizes lights, sound and digital projectors as well as direct interaction with the audience to bring home the message. 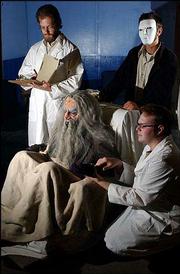 E.M.U. Theatre is staging "And Much of Madness," a play based on works by Edgar Allan Poe. Clockwise from back left are Jeff Sorrels as Dr. Franken, Wesley Magyer as a Greek chorus member, John Furst as Dr. Deckel and Kerry Magee as Valdemar

The cast has been rehearsing for more than a month and is ready to present the show.

"We have been working very hard," chorus member Ariana Uffman says. "There is a lot of movement we have worked on throughout the show. It should look pretty good."

Schwartz and the cast are sure the show will appeal both to people who are familiar with Poe's work and those who are encountering it for the first time.

"I wasn't familiar with Poe," Uffman says. "I think the message is conveyed well enough in the show that the audience does not need to be either."