In the footprints of a dance legend

Exquisite works of art often rise out of the devastation of war.

Twelve years after the end of World War II, Jose LimÃ³n took his dance company on a European tour that culminated in an extended visit to Poland.

The Polish leg of the tour was bittersweet. After receiving chilly receptions in France and England, the troupe finally greeted passionate public acclaim.

But when LimÃ³n wasn't in the theater, he was out walking the streets of Poland's cities, still strewn with rubble from the war, meeting stoic people who were slowly rebuilding their lives.

Upon his return to New York, LimÃ³n choreographed a work set to Hungarian composer ZoltÃ¡n Kodaly's "Missa Brevis in Tempore Belle" (Mass in Time of War) in response to what he'd seen in Poland.

"He felt that the Polish people had such a strength of community and spirit," says Sarah Stackhouse, who joined LimÃ³n's company in 1958, a year after the tour. "And their answer to his query, 'How can you live?' was 'We have no choice. We have to rebuild.'"

"Missa Brevis" went on to become a classic of 20th-century modern dance. It was the first piece Stackhouse learned with the company, and now she's restaging it with the University Dance Company at Kansas University.

Given the war in Iraq and the barrage of war-related headlines in the news, the timing seems appropriate, Stackhouse says.

"I think doing a piece that is a response to war or the devastation of war and yet having a real sense of uplifting powerful expression in it is very important for young people," she says. "Any time you're dancing in a group, there's that sense of somehow working together and finding a unity in your life. 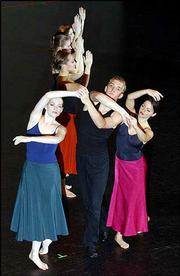 University Dance Company members rehearse "Missa Brevis" at the Lied Center. The troupe will perform the 1958 Jose LimÃ³n work during its upcoming fall concerts Friday and Saturday at the Lied Center. Sarah Stackhouse, longtime principal dancer with the LimÃ³n company, spent six weeks setting the 20th-century masterpiece on the troupe.

"But that's one of the functions of art, I think, is to really take your psyche and your emotions and your physical body and make some sense out of it, to make some unity out of the chaos that we sense in our everyday lives."

"Missa Brevis" will be the major work at the University Dance Company's fall performances Friday and Saturday at the Lied Center. Twenty-five dancers, including dance faculty member and international performer Patrick Suzeau, who will dance the solo role originally danced by LimÃ³n, will perform the work with live accompaniment provided by a 250-voice KU student choir and an organist.

Stackhouse, who was a principal dancer and partner to LimÃ³n until 1969, returned to the legendary company after a 20-year absence and has been reviving many of LimÃ³n's major works for companies worldwide.

She spent three weeks in September and is finishing up three additional months in November -- made possible by a National College Choreography Initiative grant and support from the KU School of Fine Arts -- remounting the work in what has become an ongoing relationship with KU. Last fall, she set LimÃ³n's "Choreographic Offering" on the KU company.

"I've known this piece for many, many years and danced in almost all the female roles," says Stackhouse, 67. "So, of course, it's very dear to my heart, and when I work on it, I'm always discovering new things about it. That's another of the beauties of the older work is that you can see some of these works time after time and keep discovering some new dimension, some new aspect of it."

It's important to expose young dancers to such classic works, Stackhouse says, because styles and motivations have changed so much through the decades. When she was starting out as a professional, choreographers like LimÃ³n and Martha Graham had "groupies" who were devoted to their work.

"I think that was probably, in some ways, more true of the early generations of dance, the choreographers, the dancers were drunk with this work," she recalls. "And dancing was always ABOUT something. In the '30s, because of the immigration, the people who were coming especially from Russia were extremely socially conscious. That was kind of the hotbed in New York City of the growth of modern dance. Most of these people were really dancing about social and political change."

The atmosphere is different now for many reasons, Stackhouse believes. Dancers from her generation could devote themselves more to their art because it was easier to live on nothing, she says.

Nowadays, dancers have to work to pay for their training, and programs must write for grants to receive funding.

"In order to get a grant, you have to show that you're doing something new that's never been done before. A lot of the dancing is about invention, and it becomes about the body itself and less about what's going on," she says.

And, in large part because of these grants, Stackhouse continues, "dancers have to dance to the drummer which is not in themselves but outside themselves, in the market."

Nevertheless, beautiful work is being created everywhere, Stackhouse says. She's glad to be part of preserving an important link with the past.

"I always in my life felt a call to teach as well as perform, be a performing dancer. And although I don't ever want to teach technique again, these residencies I feel are for me the richest teaching environment," she says. "You go to a place where they don't know you and they know they only have three weeks to learn this piece or maybe four.