Combining addictive gameplay, attention to detail and sky-high producton values, Prince of Persia: The Sands of Time is a strong front-runner for a Game of the Year title.

By by Alan McFann - gamer contributor

Fourteen years ago the original Prince of Persia was released. This game brought a new level of animation not seen in games before. Now, Prince of Persia: Sands of Time strives to attain the same success that most of the previous games had. 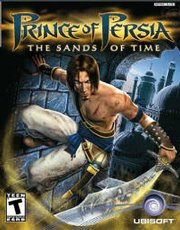 Ubi Soft's Canadian studio has taken over the reins of this franchise and the result is a product more than worthy of the previous stellar titles in the series.

The entire story is told from the Prince's point of view. This extends to when you save the game and even when you pause it, which I found very novel. The Prince is engaging in his first battle and is constantly striving to prove his honor towards his father. After the 'tutorial' stage the meat of the game begins with obtaining the dagger of time which allows you to manipulate time in a different manner of ways.

Throughout the game you can rewind time, slow down time, speed up time, the power of destiny, and the power to delay enemies. The character also eventually teams up with Farah. From that point on the gameplay can seem like the PS2's Ico, except for the fact that you don't have to walk her through the game. She fights along side you and you may occasionally have to save her, but nothing too serious. Farah also finds switches to pull which aids your progress further in the game. A great positive of this character is the dialogue between her and the Prince. Once you get past the first half of the game it becomes very humorous and adds a second story to the game.

Now, a look at the bad since there are only a few minor issues within the game that can constantly irritate. The largest flaw is the camera. At first, there isn't too much of a problem. However, once you reach the midpoint of the game it gets harder to see the ledges you have to jump towards or switches you might have to pull. Thankfully you have a first person camera mode that allows you to look around so you can quickly find what you were looking for. That said, the camera also has its strong points.

The game does a good job of attempting to clearly show you where to go -- more on that in a bit. Also, if you like your games long, than you might not particularly like this one. The average run time through this game is around ten hours. However, you do get to unlock the two original Prince of Persia games to play after beating Sands of Time.

Now, on to the many positives of the game. First and foremost are the wonderful graphics of this entire game. Areas are massive at times and look stunning during the whole game. There is a soft lighting effect that also goes a long way with the game. There are times when you just have to sit and stare at the game just to bask in how beautiful it looks. Also, character animations are simply amazing. The Prince can run on walls, run up enemies, jump off walls, swing on poles, climb ladders at an amazing speed and so much more. Watching all of this in motion is unbelievable and better yet extremely fast. I don't think that there is any previous video gaming character that has climbed ladders faster than the Prince of Persia. 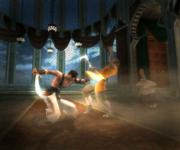 The adventure part of the game is done extremely well. Upon entering areas you are shown where you need to get to in every room. And there are some extremely inventive ways of getting there. As mentioned earlier you can run on walls, which becomes a valuable tool throughout the entire game. You will also find yourself swinging from ropes, walking on beams and much more. It is these segments that make up the bulk of the game and can prove to be very difficult in the last leg of the game.

The fighting is as top notch as the rest of the game is. At first it feels like you control an acrobatic ninja with a sword. On top of this it is extremely easy to control. Once you get into the game you will have to wear enemies down with your sword and then finish them off with your dagger. Adding to all of this is the ability to control time. The fighting sequences are where you have the ability to slow down time and speed up time and have the power to delay your enemy. These three different powers are very useful and add even more depth to the fighting. Not to mention having the power to rewind time just in case you forgot to block that final death blow from the enemy.

Moving around multiple enemies and taking them out can be quite exhilarating for the first couple hours or so. However, fighting eventually becomes tedious until the latter part of the game. You can possibly find yourself running around enemies just to get to the next section. Not to mention the fact that the camera isn't really tailored for the fighting sections at points. You can quickly find obstacles blocking your view and just randomly dodging or blocking until you can get the camera swung back around again. Overall though, the fighting is fabulous and very impressive.

The difficulty in the game goes from extremely easy to very hard by the end of the game. On the upside, you can rewind time up to a maximum of ten seconds. So, if you missed a jump and just plummeted to your death, just rewind the game a couple seconds and try it again. This can become very helpful with that touchy camera that I was mentioning earlier. A drawback about the camera is that it does its best to show you where to go and almost gives things away. To add to this at every save point you have the power of destiny that shows snippets of different parts of the level you are about to encounter (which is done in an amazing graphical manner). Also, when moving blocks around I found pre-faded spots that practically show you where to put the blocks. So, if you aren't a fan of trying to find out where to move the blocks then just look for a slight color differentiation in the floor.

The sound in the game matches the quality of everything else. The voice acting is dead on and each character provides some amazing dialogue. Sound effects within the game aren't as amazing as everything else, but they aren't extremely horrid either. The beginning boasts great Middle Eastern style music accompanying the battle sequences very well. The music in the middle part of the game dies down and just provides basic orchestral background music However, the final leg of the game's music picks up again with some guitar added to the mix making it more vibrant.

Other little things make this game even better. Simple additions such as not moving as fast when going up stairs or any incline for that matter is just something so simple that goes extremely far to adding quality to a game. This same effect is also present when going through water. Usually you have to wait about five seconds after getting out of the water before you can run up a wall, since your feet are wet. And even though I have my issues with the camera, the cinematography, if you will, is phenomenal. It's most apparent when you take your first drink of water (which is how you replenish your life). Finally, the addition of a 'landscape' camera lets you see how large and beautiful some of the environments are. These details are what create great games.

In the end, this game is perhaps my personal favorite of the year. This is a game you just can't put down. Constantly, I found myself just thinking "go to the next save point and then go to bed." But you can't do that. Ultimately, this is an addictive game that is beautiful to look at and extremely fun to play.