In the mad holiday rush when tons of games may pass you by, rest assured that you can safely ignore this paltry effort.

After Return of the King I started garnering more hope for movie games, thinking that it could be possible to make a cool translation. Enter Terminator 3: Rise of the Machines, a broken, uninventive and immediately forgettable first-person shooter that embarrasses the movie license as its backbone instead of solid gameplay. 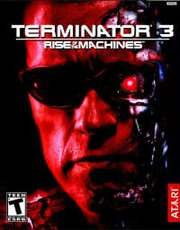 The likeness of Schwarzenegger was used to "enhance" the experience, with exclusive film footage that goes deeper into the story. You get to play the T800 even before it's reprogrammed to go back and save John Connor. I like the idea but the execution is poor.

I have never seen 20 weapons that reacted so similar it wasn't worth picking up. Sure you have a grenade launcher, rocket launcher and assault rifle that break up the tedium, but all the many laser weapons, no matter the rate of fire, just plain suck and have no personality. And in a first-person shooter, not having interesting weapons makes the game suffer.

The destructible environments are decent, but sometimes the only way to get out of an area is to blast through rubble. The difficulty is, some rubble is impenetrable and looks exactly like the rubble that you're supposed to blast through. This kind of inconsistency makes you play roulette with your ammunition, deteriorating the fun factor ad nauseum.

Shiny, those who worked on the ill-fated Enter the Matrix, gave some tips to this development team. Why? They sucked at Enter the Matrix. Their influence shows in the choppy action and just bad animations prevalent throughout.

Like Metroid Prime (I feel dirty bringing that A+ game into a comparison), you can lock onto enemies which you will find yourself doing since the controls aren't as tight as they need to be. The problem is that locking on decides to randomly switch to another nearby enemy a lot. Especially enemies that fly overhead, immediately changing your viewpoint, disorienting the gamer.

The different locales are plenty but short, that is if you can decipher your whereabouts with confusing level design. The graphics hold their own but enemies don't inspire fear like terminators would in the movie. The sound is your average fare. Samples taken directly from the movie get the job done and shine as one of the better parts of the game.

I have other games to review and play. It's a busy season. Nothing in T3 comes together particularly well and barring a keen interest in the extra movie scenes, don't even rent it.