Los Angeles — Soul singer Luther Vandross, who is recovering from a debilitating stroke that threatened to end both his career and his life, won a leading two American Music Awards on Sunday.

The 52-year-old singer can speak and walk with assistance, but representatives recently said he remained far from fully recovered. He was honored as favorite male hip-hop-R&B artist and favorite soul-R&B album for his most recent CD, "Dance with My Father," which was completed shortly before his stroke in April.

Mary Vandross, his mother, accepted the male performer award on her son's behalf.

"I'm so very sorry that Luther cannot be here tonight in person," she told the crowd, after a brief moment of tearful speechlessness. "I'm here to represent him and say thanks to all of you who made this possible."

"The Shield" star Michael Chiklis walked into the audience to present the second award to the elderly woman, who had difficulty climbing the stage steps the first time.

Tough-guy rapper 50 Cent also won two awards for best male rap artist and best rap-hip-hop album for "Get Rich or Die Tryin,"' a gritty CD about his many brushes with death on the street.

Alabama collected its 23rd American Music Award, this one for favorite country group. The quartet, which is currently on its farewell concert tour, has more AMA wins than any other performer -- followed by Michael Jackson with 21 and Kenny Rogers with 19.

The late soul songstress Aaliyah was honored as best female R&B artist, her third American Music Award since she died in 2001. 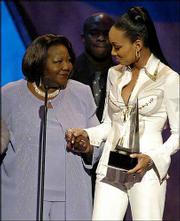 The award for Favorite Male Artist-Hip-Hop/Rhythm & Blues Music was presented to Mary Vandross, left, by singer Monica during the 31st annual American Music Awards in Los Angeles. Luther Vandross, who was unable to attend Sunday's ceremonies to pick up the award, is recovering from a debilitating stroke.

"All I've ever wanted to do is just stand onstage and sing and you fans have made it possible time and time again," said Hill, who has four previous American Music Awards.