Where the wild things are...

Exotic pet owners take walk on the wild side

Barbara Stephens, of Oskaloosa, kisses one of her pet lions. She and her husband, Dick, keep lions, tigers, leopards and cougars at their farm. Barbara Stephens calls the lions her babies even though they weigh up to 375 pounds.

Things haven't been the same at Dick and Barbara Stephens' Jefferson County farm since a cougar named "Stinky" took up residence there eight years ago.

The Stephenses didn't know much about raising cougars then, other than what they'd read in a book. But since then, their collection of big cats has grown to include African lions, Siberian tigers and leopards, as well as cougars.

"You got to learn to read their eyes, their ears and their tails, and they'll tell you what they got in mind," Dick Stephens said.

It doesn't take much for Kenny Sowers to know what is on the mind of his three-foot-long California king snake. The nonvenomous snake is content to be left alone in an aquarium.

Big business
For the Stephenses, Sowers and many others like them, the average dog, cat or goldfish isn't enough. They like their pets a bit more exotic, whether those pets are lions, snakes, lizards or tropical birds.

The U.S. market for exotic and wild animals as pets is about $15 billion annually, according to the Humane Society of the United States' Web site, www.hsus.org. The worldwide market is many more billions of dollars, which includes poaching and illegal marketing of exotic animals, the society says.

The number of captive tigers living in the United States is estimated by the Humane Society to be as high as 7,000, including those in zoos, circuses, big cat rescues and back yards.

Reptiles happy captives
The Stephenses had always dreamed about owning a cougar. But Sowers, 22, grew into an interest in snakes after working at Pet World Inc., 711 W. 23rd St. He admitted he had to get used to them.

"It's not like it was a major getting used to, but people are raised to have a kind of fear of snakes," Sowers said. "You realize they're not going to hurt you and they are just about as scared of you as you are of them."

Reptiles like being in captivity, said Sherry Emerson, who owns Pet World with her husband, Tim.

"There are no predators, and they don't miss you when you are gone," she said.

Special care
Sherry Emerson said she wanted to make sure customers really understood what they were getting into when buying a snake, lizard or other exotic pet. Reptiles can outgrow their aquariums and, as they grow, require more to eat. 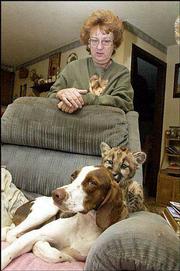 A cougar cub plays with the family dog at the home of Dick and Barbara Stephens. The Stephenses have raised several cubs in the past few years.

For some, even a snake isn't exotic enough. A few years ago when he was a freshman at Kansas University, Adam, who declined to give his last name, bought a baby alligator from a now defunct exotic pet store in Lawrence. It grew to about 18 inches before he sold it to someone else.

"I never had a problem with it biting me or picking it up," said Adam, now a senior.

But as the alligator continued to grow, the KU student had to get a bigger aquarium. His last one had a 75-gallon capacity. Adam filled it with 25 gallons of water and about 40 pounds of rocks.

"It became a hassle when I moved," he said. "When I had to leave town I had to find somebody else to feed (the alligator)."

Adam said he also learned that it was illegal under city ordinances to have an alligator.

Legal issues
Lawrence city ordinances don't specify what animals are illegal inside city limits. Instead, they describe which pets are legal. Alligators are not included. Snakes are, as long as they are nonvenomous and less than eight feet long. Big cats, like those the Stephenses own, are not allowed. Douglas County ordinances are similar.

The state of Kansas allows just about anything as long as the critter is confined and doesn't violate local ordinances. Anyone who wants a bear, lion or wolf, however, has to get a state permit from the Kansas Department of Wildlife and Parks.

The Stephenses have various state permits for their big cats. Jefferson County outlawed big cats as pets about three years ago but the Stephenses were allowed to keep the cats they already had. They will not be able to replace them when they die, and they are required to sell any babies the animals might have.

Possible dangers
Exotic pets of all types are available on the open market. The Internet is full of Web sites selling exotic animals and there are special sales publications advertising them. Even dangerous animals and reptiles can be found for sale, such as cobras and rattlesnakes.

"Every once in awhile somebody comes in and asks 'can you get us a cobra?'" Emerson said. "We don't play in those areas."

Earlier this year an outbreak of monkeypox in Kansas and other states caused concern among health experts because the disease is carried by rodents, including prairie dogs, that some people have as pets. The monkeypox cases spurred the release this month of new federal guidelines concerning the transport and sale of rodents.

Publicity about monkeypox did not slow the public's interest in exotic pets, at least locally, Emerson said.

The Stephenses don't recommend people get into the hobby or breeding of big cats just because they think it's fun. For one thing, big cats are expensive, with the animals costing from several hundred to several thousand dollars each, not counting the cost of the tremendous amount of food they eat.

The Stephens spend nearly $200 a week on food for their animals alone, they said. The food is primarily meat and is kept in four large freezers.

"There is an awful, awful lot to learn about them," Dick Stephens said. "Down there in the pen, you are in their territory."

Leopards are sometimes the hardest to deal with, Dick Stephens said. "They are the biggest intimidators," he said.

One of the Stephenses' favorite cats is a 700-pound Siberian tiger they call "Tuffy." They frequently take him to area parades.

Stephens plays with a cougar cub in her home. She and her husband own several big cats as pets.

And they have a 9-week-old cougar they allow to roam freely in their house.

"I'm probably the only person who has their hair groomed every morning by a cougar," Dick Stephens said.