ESPN College Hoops is the game you will keep going back to. It will call your name with the wonderfully produced college atmosphere

In the past couple of years, both Sega and EA have woken up to realize that college basketball is huge. These games traditionally got the shaft as far as presentation and quality. For those that hate the NBA and love the college game, your time has come. 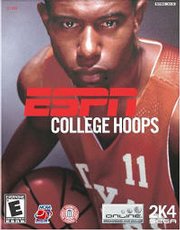 ESPN College Hoops could be the first full realization of the college game. Season, Dynasty and Exhibition modes all cater to how deep you want to be involved with your team. You can recruit and even participate in high school games, while hiring a strong assistant staff to help you along. This is especially challenging when you create your own team, but is not so difficult as to defeat any sense of reward. You can adjust your coach's style for more flash or fundamentals, defense-minded or offense minded among other sliders that do slightly affect the outcome of your team during the season.

Like all NCAA games, the likeness and names of the players can't be used. However, commentators Jay Bilas and Mike Patrick pre-recorded almost all major names in the NCAA, so when you change the names on the roster, Jay magically says their names. There is an option for downloadable content including rosters. Hopefully those will be up soon so we don't have to spend hours inputting correct rosters. Speaking of the commentary, the content is good, but the timing can be downright awful. If you play half-court offense and are defense minded, the timing should be decent for you. But if you are a fast-break, power-shooting team, the commentary will fall behind consistently as baskets are traded often in a short amount of time. It's kind of a drag.

What's most impressive about this edition is the fact that how you defend your man directly affects how the rest of your team fares. In many lazy attempts at basketball AI, if you lose your man, your teammates will stay on their man no matter what, never stepping up to help you in any situation. In ESPN CH, your individual bad defense will draw help from closer teammates usually, creating more space for the offense as your defense thins out. This is much more like a real college basketball game. The point? Stay on your man or play your zone correctly and your whole team should fare better.

The game controls like ESPN NBA but feels totally like a college game. With real school chants, fight songs, accurate arena models for the majors of the whopping 326 teams (yes, the new KU floor with the friggin' huge Jayhawk is there), and new 3-D crowd animations, no college basketball game comes close to the atmosphere ESPN CH creates. My favorite instance was when Missouri drained a tough 3-ball to tie it up while in KU's Allen Field House, the game cut to a crowd scene of an MU fan in a sea of KU fans, taunting them. But then a KU fan in front of him steps on his chair and advances toward him to take him down. Awesome. Even the rivalries are equally charged. Good stuff.

Isomotion has been borrowed from ESPN NBA and with pride. You can perform jukes and other evasive maneuvers with the right analog stick. But don't be stupid with it. If you take any power forward and try to do crossovers and jukes, it's guaranteed almost that the ball will be stolen. This is college. Defense is key, but ten foot jumpers are easier to make than the NBA. If you see no reason for Isomotion, you may switch the right analog stick to be a direct pass stick.

The new slam session mode is an addiction unto itself. You have to finish so many dunks in the allotted time. You start off with easy dunks that take two buttons to perform, timing them correctly on the dunk spots put on the floor. As you move forward, the button combos get tougher and the dunks get flashier. I had to stop myself before I totally ignored the rest of the game.

But then I went to the Student Lounge mode where there is an air hockey table and spent too much time playing air hockey. You can enter a rivalry mode with some classic rivalries and also go online with both versions and seek North Carolina teams to kill. There are also unlockable teams, trophies and bobbleheads to be achieved, making the replay value very robust.

ESPN CH does have its share of bloopers though. Since the shoot and dunk buttons are the same, dunking may prove to be a challenge from some spots. It's just weird to see Wayne Simien lay it up from right under the basket. In ESPN NBA it didn't seem to be much of a problem but happens consistently here. There are too many instances of back court violations and out of bounds calls for the other team. Most are so random you wonder why it wasn't rounded out. Some cutscenes show some bad collision detection as well. These sort of refinements could make this game superior.

Regardless, ESPN College Hoops is the game I keep going back to. It calls my name to forecast the season for the Jayhawks. With so much to do in a wonderfully produced college atmosphere, this is a must own for college hoops fans.