Fallout from 'The Day After'

The TV movie "The Day After," which aired 20 years ago this week, portrayed the destructive result of a nuclear attack on Lawrence. In this downtown scene west of the intersection of Ninth and Massachusetts streets, Weaver's Department Store is visible at far left.

On Nov. 20, 1983, Lawrence endured fallout from the blasts of nuclear missiles that struck neighboring Kansas City. The area was scorched by firestorms, citizens were vaporized, and those lucky enough to survive suffered the slower effects of radiation poisoning.

At least that is what was portrayed in an ABC television movie that became one of the most watched and most controversial events of the decade.

"The Day After" -- billed as a "starkly realistic drama of nuclear confrontation and its devastating effect on a group of average American citizens" -- was viewed by half the adult population of the United States, which was the largest audience for a made-for-TV movie up to that time.

Quite a media phenomenon for a film that was situated and predominantly shot in Lawrence.

"Other movies that had attempted to deal with the subject of nuclear holocaust had always been set it in big cities," says "The Day After" director Nicholas Meyer. "But a great number of people in the United States do not live in big cities, so they were witnessing an event that seemed to bear scant relation to them."

Selected clips from the film...

Scenes from Lawrence, before the bomb

Lithgow: 'This is Lawrence... is there anybody out there? Anybody at all?

Scenes from 'Tent City' on the Kaw

The script (by Edward Hume) decided to position the film in Lawrence, partly because of the fact it was near the geographic center of the continental U.S., but also because it made the tale more representative for what would happen to the average Joe.

"I have an enormous soft spot for the Midwest and the hospitality, the generosity and the openness of a lot of the people who live there," says Meyer, a graduate of the University of Iowa. "There's no question that 'The Day After' could not have been made without the volunteerism of thousands of people from Lawrence. We just didn't have the budget to produce the movie that THEY produced.

"The idea that people would come out for a sandwich and a couple of bucks -- clearly that wasn't what was on their mind," he adds. "Some were intrigued by the idea of being in a movie, but a lot more were actually drawn by the subject of the movie itself and a sense of self-urgency."

Of the 80 or so speaking parts, only 15 were cast in Los Angeles. The remaining roles were filled in Lawrence.

"Everybody was very excited about it. It was infectious," says Jack Wright, Kansas University professor of theatre and film. "Everybody likes movies and will certainly audition for roles if they can get a chance to be around movies. There was an awful lot of hype as the thing went on." 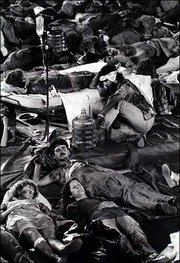 Actors portraying victims of a nuclear explosion near Lawrence are spread out across the floor of Allen Fieldhouse.

Wright was hired to head the local casting of the film -- his first such cinematic experience that would pave the way for a long career with his company Wright-Laird casting.

Among the more memorable of these assemblies was for a sequence near the finale where hundreds of ailing war victims crammed into Allen Fieldhouse, which was the only place left on campus big enough to accommodate so many wounded. (The extras were asked not to bathe for days in order to make the scenes more realistic.) Other shots involved "Tent City" -- an area along the banks of the Kansas River where the teeming homeless set up a makeshift camp.

"I remember being down in Tent City at about 4 in the morning," Wright recalls. "All the (characters in the movie) had gone down there and taken with them things from their home; each tent had a television or some personal remembrance from the home. I remember getting there in the morning and the designer had built this beautiful city of such detail. I just walked around before anybody else had arrived, and it was eerie. It was just like, 'Oh my God. This could REALLY happen.'"

For Lawrence attorney Charles Whitman, the movie gave the lifelong theater veteran his first crack at the big screen.

"What I took away from it was that the lighting man is the most important person on the set," he says. "Seriously. The actors are not all that important in the absolute sense -- not the same way as we do it in a stage play."

Whitman starred in a dialogue-rich scene as a bureaucrat who meets with a group of farmers in the aftermath to explain the harsh environmental realities of trying to regenerate crops. As a kind of in-joke, the majority of the farmers were played by KU professors, including such notables as Herk Harvey, Charlie Oldfather and William Kuhlke.

"If you're going to bring a production into a small community and use a lot of the community resources, it helps to get the locals involved in a few scenes," Whitman says. "That's something that doesn't happen anymore as a result of the collapse of location filming in the United States, because of the amount that has been outsourced to Canada and Australia. We don't get films here in Kansas anymore. We used to get two a year."

The obstacle
While hundreds of actors, crew members and extras were dealing with their day-to-day chores, filmmaker Meyer was wrestling with the big picture. Although he was already well respected for helming the blockbuster "Star Trek" sequel "The Wrath of Khan," and had received an Oscar nomination for writing "The Seven-Per-Cent Solution," Meyer found the TV project innately problematic.

"As a movie, I was well aware even at the time of its shortcomings," he says. "There is a paradox about nuclear war in that it is the most urgent problem that has ever confronted the human race ... but at the same time it's such a terrible dilemma that none of us can really bear to think about it. So if you make a movie about it, the audience will go anywhere their minds can rationalize to avoid confronting the movie. They'd rather talk about the music or talk about how Jason Robards was brilliant -- anything, other than the subject. So as a director I found myself engaged in a counterintuitive exercise of trying NOT to make a good movie.

The editing
When ABC originally envisioned "The Day After," it was nearly four hours long and intended to be shown over two consecutive evenings. Meyer thought the middle portion of the script was too padded, but he went ahead and shot the full-length version.

When it came time to edit, he made a pitch that the picture would have far more impact in a two-hour, one-night format. ABC president Brandon Stoddard and the other executives initially balked at the idea. Yet overnight they changed their minds.

"What they didn't tell me is that all the advertisers had fled," Meyer reveals. "General Mills, General Motors, General Foods -- all the Generals had headed for the hills. So suddenly the advertising revenues that were anticipated became completely moot. That's how it became a two-hour movie as it always should have been."

In a landmark move, the network decided that no commercials would be shown after the bombs dropped on screen.

"The subject matter was so powerful at that point that to cut to a commercial would have been ludicrous," he says. "Even they -- the ubiquitous 'they' -- were overwhelmed by the incongruity of going to ads for oven cleaner after annihilation."

The broadcast
Right before the movie aired it was screened for the Joint Chiefs of Staff.

Meyer recalls, "I had somebody I knew in the room who said, 'If you thought they were going to snicker or pick it apart, you are mistaken. They sat there like they were turned to stone.'"

The majority of Americans responded as soberly.

Although ABC set up 1-800 lines and distributed half a million "viewer's guides" as a way to help the Cold War-paranoid audience psychologically deal with the subject matter, even they couldn't prepare for how much of a social impact the film would have.

"The Day After" debuted on Nov. 20, 1983, to a maelstrom of publicity and controversy. Nearly 100 million viewers tuned in -- a record audience for a made-for-TV movie.

Representing the Ronald Reagan administration, Secretary of State Shultz was in full-damage control mode, making comments such as, "The only reason we have for keeping nuclear weapons is to see to it that they are not used." 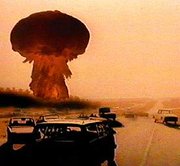 It was also during this gathering where Sagan first introduced the phrase "nuclear winter" into the lexicon (an event actually depicted in the film). And he presented the vivid analogy that the arms race between the U.S. and Soviet Union was akin to "two men standing waist deep in gasoline -- one with three matches, the other with five."

The aftermath
"The making of the film was to date the most worthwhile thing I ever got to do in my life," Meyer asserts. "Any movie that the President of the United States winds up saying changed his mind about the idea of a winnable nuclear war is not an insignificant achievement. The Reagan administration came in thinking about 'acceptable numbers' of nuclear casualties. (Reagan's memoirs reveal) what he had to say about the effects of what 'The Day After' had on his thinking.

"When he signed the Intermediate Range Weapons Agreement at Reykjavik (in 1986) with Gorbachev, I got a telegram from his administration that said, 'Don't think your movie didn't have any part of this, because it did.'"

"The Day After" went on to be nominated for 12 Emmy Awards and win two.

It was released theatrically to 40 countries where it did quite well financially. (This reporter actually saw a subtitled theatrical version in Athens, Greece, during the summer of 1984.)

"Whether this is a credit to Meyer or the production team, the film got shown all over the world," says actor Whitman. "It got shown in Russia at a time when you wouldn't expect such a film to be shown."

Director Nicholas Meyer is shown here during the filming of "The Day After" in 1982.

The TV special provided a great role for the late Robards, as well as gave fledgling actors such as John Lithgow, Amy Madigan, Steve Guttenberg, Arliss Howard and Wayne ("Hello, Newman") Knight an introduction to audiences.

"Hollywood does not often offer you the chance to put your work in the service of your beliefs," adds Meyer, whose latest project is as screenwriter of the new Nicole Kidman/Anthony Hopkins drama "The Human Stain."

As for its lingering repercussions on Lawrence, "The Day After" is still the biggest film or television production to ever converge on the city.

"I persist in the conviction that part of the reason this film struck such a nerve is that Kansas is an icon," Whitman says. "It may be an icon everywhere. It partly has to do with 'The Wizard of Oz.' It partly has to do with the idea that that's where your mother lives. Everybody's grandma lives in Kansas. The idea that nuclear war could happen here was just too much for people to deal with."

People stand on the southbound span of the Kansas River Bridge to observe the makeshift village "Tent City" during the filming of the movie "The Day After" in September of 1982.