Shortcomings aside, Sphinx provides a lengthy experience with heart, challenge and moments of brilliance uncommon in this year's holiday rush.

In an industry of highs, lows, surprises and disappointments packed into a busy holiday season, it's the unexpected surprise that always delights. Sphinx has gone through many name changes in its lengthy development cycle, being compared to a modern Legend of Zelda. My last "like Zelda" game was the disappointing Starfox Adventures, so please excuse me if I didn't expect much from THQ's "like Zelda" game. The result? Sphinx and the Cursed Mummy is another holiday surprise, capitalizing on many gameplay elements of a Zelda game, if not a little more shallow and linear. 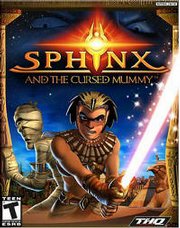 What's first striking about Sphinx is the scope of the expansive environments and impressive draw distances. Textures are lush and beautiful and the architecture envelops the gamer as if he were in an Egyptian environment. Nothing drives this home like its 16X9 widescreen capability for the HD owners. (Although the Xbox version claims to run in 720p, it only provides 480p like the Gamecube version. Too bad.) Unfortunately these gigantic environments come at the expense of the flow of the game with heart-stopping load times between many environments. This is readily apparent when you have to visit a small shop or game area and you have to endure two long load times within a short period, going in and getting back out to the main area.

The third-person action/adventure gameplay does, indeed, back up the visuals. You start off as the hunky demigod Sphinx, on your way to collect various ancient crowns to return to restore the world. Along the way you uncover a plot against Prince Tut who gets killed and revived as your mummified accomplice.

Levels are broken up into Sphinx stages and Mummy stages. The Sphinx stages have a heavier concentration on seek and find items to open this to go here type mentality, whereas the Mummy stages are purely elaborate puzzles which provide a bigger challenge and less places to save. Of course, you can't die as the mummy so there isn't the risk of having to digress your efforts. The Sphinx can traverse towns to play mini-games, advance in weaponry and find random items, but the depth of freedom isn't as expansive or coherent as a Zelda adventure. That being said, what's there is fun and provides solid entertainment.

The battle system is nice. You can jump, slash your sword and use your eventual shield in a satisfying display of third-person combat. There is no lock-on feature which can prove tedious when the camera doesn't cooperate, but overall the battle engine survives without the feature.

The puzzles are easy at fist and then get really clever. Not since Ocarina of Time have I had to scratch my head and pay close attention to my environment to solve a puzzle. The solutions are always satisfying, especially when you play as the mummy.

The camera can and will get in your way, I guarantee it. When trying to rotate around your character in close quarters, the camera refuses to change its radius and will just refuse to move. Most games get around this by making walls transparent in interesting ways or just making the camera use the space it has, bringing the action real close for the short instance. None of these tactics are implemented here and you will find yourself wrestling with the camera on a consistent basis.

The sound is a mixed bag of wonderful sound effects hitting the pops and crashes on the nail and a so-so Egyptian score that is buried in the background where it should be. Also, there is no real dialog. Just a lot of text and overdone mouth animations. None of these elements are terrible but with a 200-person development staff you would assume the ambitious project would've included real dialog.

Shortcomings aside, Sphinx provides a lengthy experience with heart, challenge and moments of brilliance uncommon in this year's holiday rush.