It amazes me how a franchise can go from extremely promising to near unplayable from game to game. Such is the case of Rising Sun. 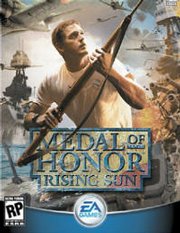 In the Saving Private Ryan-inspired opening trench scene from Medal of Honor: Frontline, you were treated to an immersive, intense beach battle, trying to provide cover fire. The remainder of the levels seemed not as good but did hold its own providing decent entertainment overall.

This template continues in Rising Sun. EA passed its history test and allows you to play through many of the theaters and campaigns in and post Pearl Harbor. The layouts are accurate and the between-game presentations are fitting. However, this is paired with a lack of anything engaging due to ill-tempered controls, poor transitions and buggy, yes buggy, presentation and implementation.

Much like Return of the King, you are thrown into the action from boot-up, not accessing any menu screen. You are expected to know many of the controls immediately, unlike ROTK, which makes the initial mini objectives pretty annoying. Instead of the screen saying "Press X to crouch under the fire" it says "Press CROUCH to crouch under the fire." Well, I don't know how that's mapped yet. You make your way through your ship, trying to get to the top to fight off the Japanese planes during the surprise attack on Pearl Harbor. You help seal a door, put out a fire with an extinguisher in mini tasks you need to perform to get out. It adds nothing to the disappointment you already feel from the uninspired in-ship model and weird default mapping of the button. You reach the top, the music starts, then stops, then a cutscene, and then you take a rail gun to shoot down planes with ease, if you can keep the frame rate from jumping, which is difficult. The scene is beautiful from far away, but the fire and smoke that plumes looks like a bunch of yellow and black triangles versus actual effects. The blah graphics take you completely out of the mood and defeat your sense of fun. All of this while the music decides to cut in and out repeatedly and sometimes the intense battle scene is inexplicably quiet. "Am I playing a beta version?" you'll ask.

Then the game gets bad.

The only pretty part of the game.

Take the claustrophobia you caught from the level designs in Frontline to the tenth power. This can easily describe the rest of the game. The missions and objectives are stale rehashes of every known shooter. The character models are confusing, the buildings look like washed out dirt and the vehicles are unacceptably poor even for a first generation game. Accents are either poorly drawn or suffer from not knowing if it should exist or not. For instance, a tank shell takes out a wall and it crumbles. A second later the wall reappears, then disappears and does this continually. In some corners of some maps, you will see drawing grids instead of the actual game. And yes, I got all of these unrefined bugs to duplicate on all three versions of the game.

Multiplayer is the game's cornerstone, unfortunately. PS2 owners can go online. Otherwise you can have 4-player split screen. The locales are plentiful, if lacking in sniping arrays. The reactions of the weapons are standard and the animations are functional, providing a multiplayer experience that might suffice if you've never heard of, well, any other first person shooter with multiplayer capabilities.

When the sound isn't glitching, it is nice to listen to most of the time with decent orchestration and great pings and pops.

There is no excuse for this game to be out. In the flooded first-person shooter market, there is no more room for "okay" or even "good" games, let alone ones that are uninspired and underdeveloped like Rising Sun. The game has "rushed for the holidays" all over it like a bright pink neon sign.