'Cat in the Hat' is not all that

Mike Myers stars as a 6-foot-tall feline in the adaptation of "Dr Seuss' The Cat in the Hat."

At their core, Dr. Seuss' books contain a legitimate message.

From the racism fable "The Sneetches" to the ecologically cautionary "The Lorax," author Theodor Geisel found a means to make his colorful, wildly inventive tales resonate beyond the images.

But Hollywood adaptations have a way of focusing on the packaging more than the contents. The live-action version of "Dr. Seuss' How the Grinch Stole Christmas" released three years ago proved to be a crass, heartless downer. It was yet another case of throwing money at the screen when additional time spent polishing the script would have helped matters much more.

Admittedly, there's not much of a message to "Dr. Seuss' The Cat in the Hat" -- other than such platitudes as "try and behave" and "lighten up." Even so, the film's complete commitment to copying the late author's visual style helps make the venture watchable.

Hyperactive star Mike Myers handles the title role of a magically empowered feline who materializes in order to baby-sit a pair of siblings named Conrad (Spencer Breslin) and Sally (Dakota Fanning). The kids are left in the house by their mother (Kelly Preston) and instructed to keep the place clean in anticipation of a work-related party she is hosting.

Of course, the mischievous Cat seems to exacerbate the situation.

Or is there a method to his madness?

The casting of Myers in "The Cat in the Hat" is a mixed blessing. The Canadian star always brings an irreverent, self-referential energy to his projects, and this picture is no exception. (He interprets the Cat as a combination of the Blue Genie from "Aladdin," the Cowardly Lion and 1970s TV mainstay Charles Nelson Reilly.)

Yet there is also a real distance to his persona. Very little of Myers the individual comes through in his roles. Even at his most entertaining he remains emotionally aloof.

Coincidentally, the movie echoes this.

Style is everything here, from the pastel houses to the retro '50s costumes to the exaggerated props to the wacky special effects. First-time director Bo Welch -- best known as the Oscar-nominated production designer of such eye-catching delights as "Men in Black" and "Edward Scissorhands" -- is certainly the right choice from a design perspective. There is never a lull in the visual activities he foists onto the screen. (Some critics will no doubt complain there is simply TOO much.)

Hyperactive star Mike Myers stars as a magically empowered feline who shows up to baby-sit a pair of troubled siblings (Spencer Breslin and Dakota Fanning). There's not much heart or emotional connection in this short flick. Even so, the madcap film's utter commitment to copying Seuss' visual style helps make it watchable.

Welch is also good at capturing the slight creepiness that underlies some of the Seuss books. Nowhere is this more apparent than his visualization of the Cat's hideous accomplices, Thing 1 and Thing 2. Decked in red pajamas and towers of blue hair, they're the most unsettling, androgynous twins since those girls who stood at the end of the hallway chanting "Hello, Danny" in "The Shining."

All the wild visual textures don't disguise the fact that the film makes little connection with its characters. Like Myers, the Cat remains a complete enigma whose motivations are never clear. Even with his superpowered help, Conrad and Sally seem to solve their psychological issues too hastily. It's not entirely convincing they've learned ANY actual moral lessons from their ordeal. 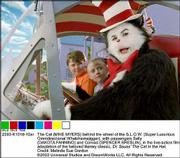 Spencer Breslin, left, Dakota Fanning and Mike Myers star in the live-action version of "Dr. Seuss' The Cat in the Hat."

"The Cat in the Hat" is just short enough at 82 minutes that it doesn't overstay its welcome. Like any good children's book, it works best in small doses.