New York — Ellen Burstyn's return to the Longacre Theatre has been less messy than her debut years ago but also bittersweet -- and short.

Back in November 1957, the budding actress arrived on Broadway for a production of Sam Locke's "Fair Game" as a 24-year-old beauty with no theater experience. Her most prominent role until that point was being eye candy on Jackie Gleason's TV show.

Veteran actors at the Longacre had their knives out in welcome.

"It was a play with some rather difficult actors," Burstyn recalls, diplomatically. "I had no technique -- it was my first audition, and I got a lead on Broadway. So there was probably some resentment. You know, 'Who is this young whippersnapper coming along and getting a lead?' It was a difficult experience."

Forty-six years later, the former whippersnapper returned to the Longacre with an Academy Award, a Tony, international acclaim and a new play. And this time, she was the only one on stage.

"There are no difficulties with other actors in this play!" she exclaimed, laughing, a few days before the play debuted Monday.

Burstyn played Lucille Marsden, a tough-as-nails 99-year-old nursing home resident who tells stories stretching back to the Civil War days of her much older husband, Confederate Capt. Marsden. Like the novel, the play explores the war between the states and the sexes as seen through the jaunty eyes of a woman who married at age 15, lived through Reconstruction and delivered nine children. 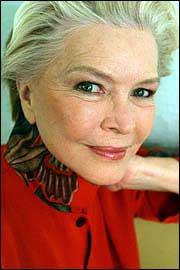 Actress Ellen Burstyn poses backstage at the Longacre Theatre in New York. Burstyn was the star of the play "Oldest Living Confederate Widow Tells All," which opened and closed at the theater on the same day.

On stage for two hours, Burstyn seemed to revel in the humor, delivering such lines as: "Folks oohed and aahed that somebody as skinny as I was could have so many kids so fast. It's like a jar of olives -- once you get the first worked loose, others topple more freely."

The original script came in at a whopping 17,000 words, though it was pared down to the 14,000-word range. And, besides Lucille Marsden, Burstyn did about 20 other characters, making the show a marathon as much as a tour-de-force.

"By doing the same material every night, it gets deeper and deeper and deeper. I always say my best performances have never been reviewed because I don't get good until a couple of months after the critics have left."

Even so, critics have been impressed by her work. During the 1970s, she starred in such classic films as "The Last Picture Show," "The Exorcist" and "Alice Doesn't Live Here Anymore," for which she won an Oscar in 1975.

Her other movies include an adaptation of Henry Miller's "Tropic of Cancer," "Alex in Wonderland," "The King of Marvin Gardens" and "Divine Secrets of the Ya-Ya Sisterhood." Her portrayal of a lonely, pill-addicted mother in Darren Aronofsky's "Requiem for a Dream" earned Burstyn her sixth Oscar nomination.

Burstyn also has claimed the rare distinction of winning a Tony for the romantic comedy "Same Time, Next Year" in the same year she was handed her Oscar. Her other Broadway credits include "84 Charing Cross Road," "Shimada," "Sacrilege" and the one-woman play "Shirley Valentine."

She returned to the stage when her film career softened, as it did for much of the 1980s, when the actress was relegated to doing TV movies.

"You know, I've never confused employment with work," she said. "I'll do my work, and feel lucky if I get employed now and then. I don't feel frustrated in any way or underutilized. I just work."

During the past few years, Hollywood returned to knock on her door after she won raves for regional adaptation of plays by Horton Foote and Eugene O'Neill.

Burstyn met Gurganus while she was in North Carolina to appear in Foote's "Death of Papa" and then went on to star in a production of "Long Day's Journey Into Night," in Houston. After filming "Requiem for a Dream," she was eager to play a Confederate widow.

"Once I got back on stage, I started learning again," she said. "I started getting some new, green shoots."

Landing Burstyn as the voice of his narrator was an instant delight for Gurganus. Despite her body of work, the novelist suspects she hasn't always gotten her due in Hollywood because she's not enough of a diva.

"She has all the options of a movie star and she exercises none of them. It's all about the work for her. She turns everything back to enriching her talent and her resources," he said.

"For me, it's very moving to have an instrumentalist who can play every instrument in the orchestra."

For Burstyn, who turns 71 in December, the depth of the play's meaning changed as she explored the characters. She was even surprised to find new emotions bubbling up from mysterious places.

"My acting teacher, Lee Strasberg, used to say, 'We are the violin and the violinist.' That's not true in any other art form: Everybody's instrument is separate from their body. So we go out there to play the violin, but sometimes the violin does it's own thing," she said.