Poughkeepsie, N.Y. — Theirs are the faces of joy and sorrow, resignation and rebellion.

A woman laughs as an infant playfully grabs her nose.

Parents mourn the death of a child, whose head is cradled in the mother's arms.

A peasant prepares for an uprising by sharpening the scythe he will use as a weapon.

The images from German artist Kathe Kollwitz explore themes of motherhood, activism, war and death in the exhibition "Kathe Kollwitz: The Art of Compassion," which runs through Dec. 14 at Vassar College's Frances Lehman Loeb Art Center.

Kollwitz, who died in 1945, has been called "the woman who feels everything," and her works are unblinking portrayals of the often-tragic lives of real people.

"She had a very different outlook on life -- she was very thoughtful," said Patricia Phagan, the center's curator of prints and drawings. "This was very unusual. There were critics at the time who exclaimed that she could draw as good as a man."

Kollwitz was denied entry to the Berlin Academy of Art because of her gender but eventually became the institution's first female professor. In 1898, she was denied a gold medal at the Great Berlin Art Exhibition, in part for the same reason. 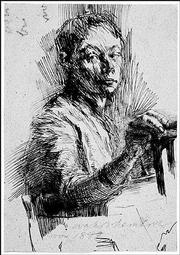 AP Photo This pen and ink drawing over graphite on wove paper, titled "Self-Portrait, Drawn in Half-Profile to the Right, 1891-1892" is among the works by German artist Kathe Kollwitz on display at Vassar College in Poughkeepsie, N.Y., through mid-December.

Kollwitz lived during a time of upheaval in Germany that included two world wars. Gunter Klabes, a German studies professor at Vassar who teaches about Kollwitz in a course on German identity, said the artist's work is informed by -- and seems to foreshadow -- the changes in the country.

"There is an anticipation, almost a visionary quality, in her art and that of German expressionists of major changes taking place," Klabes said.

Her work can be found in the Museum of Modern Art in New York City and the Fine Arts Museums of San Francisco. Besides the prints for which she is best known, the Vassar show also includes 30 rarely seen drawings, on loan from the Staatsgalerie Stuttgart in Germany. Vassar is the second and final North American stop for the exhibition. It was first displayed at the Art Gallery of Ontario in Toronto.

Kollwitz's drawings are full of rough lines, images drawn over the top of others and other markings that show her experimentation with different techniques and ideas.

An early sketch depicting Kollwitz's face and the body of a naked woman return in a drawing titled "Life." Elements from "Life," a three-part composition that shows scenes of a prostitute and parents with a dead child, also appear in the artist's prints.

"The drawings are the heart, the core, of the prints," Phagan said.

In the two drawings, Kollwitz has drawn herself as if watching the grisly events taking place, and Phagan said the artist likely based the work on events she witnessed firsthand. Kollwitz lived in one of Berlin's working-class neighborhoods, and her husband was a doctor who primarily treated the poor.

Workers were also the subject of Kollwitz's print series -- 1897's "A Weavers Rebellion" and "Peasants War" from the early 1900s, both of which were based on events from German history. In a 1941 quote accompanying the exhibition, the artist said her early focus on the theme came because "only such subjects gave me in a simple and unqualified way what I felt to be beautiful."

The print series seem to advocate the use of violence as a way of ending persecution. Kollwitz's later work, however, reflects a growing anti-war stance influenced by the death of her son, Peter, in World War I.

"She became a pacifist when Peter died," Phagan said during a recent gallery tour of the show. "Throughout her life, Peter was central to her emotions and central to her art."

Peter's face appears almost as often as the artist's own, and the two often appear together. A 1919 lithograph entitled "Mothers" shows several women protectively embracing their children. The figures include three people who resemble Kollwitz and sons Peter and Hans.

Phagan said all the works have a connection with Kollwitz's own life.

"They're autobiographical because of the immediate way she has of communicating universal emotions about death, about love, about embracing the one that you love," she said.

The Frances Lehman Loeb Art Center is about 70 miles north of New York City. "Kathe Kollwitz: The Art of Compassion" is open through Dec. 14. Admission is free.