The shock is so morbid and gruesome that you must make a moral decision about the game, especially once the killing gets boring.

By by Nick Farrore - gamer contributor

Rockstar is a company that lives and thrives in the extreme. It's no surprise that an unapologetically brutal title would come out of its camp. Still, Manhunt is an experience in which you will constantly question to what extent you should actually be enjoying it. 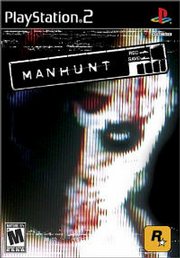 Rockstar does a great job of making you feel like the main convict James Earl Cash in a morbid game of stealth and murder. Your narrator/helper assists you throughout your "journey" to freedom, giving you objectives from training to the bitter end. Using an array of weapons, items and firearms, you must sneak up behind your enemy to attempt a surprise execution. The longer you hold down the execution button without them noticing, the more gruesome the execution. The kill is presented in a cutscene made to look like a grainy VHS tape with bad tracking likened to a snuff film. If you've seen the movie 8mm, you should be familiar with the air of this game. This tactic is effective in making the executions more horrifying, as if you're about to watch something from the Faces of Death series.

Like Fatalities in the original Mortal Kombat, the crux of the gameplay relies heavily on the shock from watching the killings. By nature, shock only lasts awhile and your mind normalizes eventually. This is when the executions become boring and you won't be interested in the slower executions anymore, falling back on quick killings, stealth and the gunplay/fighting mechanics.

The stealth engine is pretty standard. Hide in shadows, walk slowly as to not alert the enemy or make noise on purpose to draw them. The AI is a mixed bag. Enemies won't care too much if their dead cronies are lying around lifeless. They will make a comment about "wow, this guy is good" with tons of added expletives, but no added fervor to find you will be potent. Many times you find hiding in a shadow when an enemy is chasing you, but if you are a fair distance away, they will magically lose you even though they are looking straight at you from a seeable distance. On the harder difficulty this gets better but the defect is still prevalent. On the flip side, the enemies will alert each other of your presence if you are visible, providing a melee for you to run away from. But then again, if you stay hidden long enough, they forget about you, as if their memory resets.

The fighting engine leaves much to be desired. You will need to use the lock on feature if you are to stay engaged in combat. Your weak and strong attack buttons react slowly which gets quickly annoying since the enemy is in a hurry to kill you. This results in the enemy landing more punches since you can't predict your and the enemy's timing simultaneously. So you press back on the analog stick to block. The problem is, the blocking mechanic is a broken crap shoot. Since "back" refers to where you are facing, there are so many angles that need to be forgiven that just aren't in this game. What results is a frustrating time trying to button mash faster than your opponent. This could've been better.

The gunplay is by far the most polished of the mechanics, using the L2 and R2 to strafe from a distance while firing. The sense of gunplay is done well, slightly reminiscent of GTA.

Speaking of GTA, this game is not wide open. It's very linear, which can be okay and works here. There is a point where you can escort hostages to safety, but you get no different story or status if you do.

The graphics are dark and grainy and sport some nice character models. Blood is used liberally but the textures, specifically of trash heaps, the ground and walls are very pre-generational. The sound is separated wonderfully in Dolby Pro-Logic II with high quality sound samples and tons of speech. The sound effects and clanging sounds change upon context i.e. a bat will sound differently struck on wood than a metal gate.

You will, indeed, feel like a convict trying to survive. Luckily, you won't be killing innocent Sissy Soccer Moms; the game stays within its scum-infested trashy human context. Still, the shock is so morbid and gruesome that you must make a moral decision about the game, especially once the killing gets boring.