The title is not just a clever name

By by Nick Farorre - gamer contributor

Backyard Wrestling is a backwards underground phenomenon where idiot kids use common everyday objects and scenarios to wrestle, fight and beat the piss out of each other. The cult event now has a home on the PS2 and Xbox and provides an interesting diversion from the normal wrestling genre, but is marred by over-sensitive controls and severely limited action. 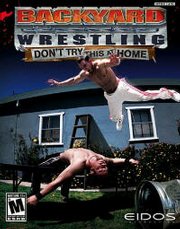 From the slaughter house to the stage of a Jerry Springer-esque talk show stage, Backyard provides some interesting locales to wrestle in. Add interactive environments and objects to the mix, and you have a setup full of potential. All of this comes crashing down at the feet of sloppy gameplay.

Your basic moves are simple to press but somehow tough to execute as the response can be very sluggish. Running away from thrown objects should be as easy as sidestepping, but for some reason every thrown object is heat-seeking. This is the type of lazy mechanics that litter the game.

The talk show mode is nothing more than a series of survival matches strung together by cutscenes that never hit the funny bone. You can play regular one on one matches, but outside of these, there is nothing really mode-rich about the game.

The character models are there and functioning with no luster. The sound does stand out with killer tunes from Rancid, ICP and even Further Seems Forever.

Overall, though, the concept is promising but this effort is nothing short of lackluster, worth nothing more than a mere look-over at the store.