The bunny is funny

Eidos is gracefully recovering from the Tomb Raider: Angel of Darkness disaster with a slew of holiday titles. Whiplash is a nice platforming title with an awesome sense of humor and neat twist to the genre. 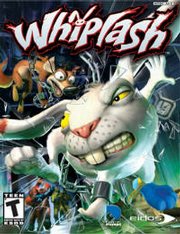 You are Spanx the weasel chained to a wise-cracking rabbit named Redmond. Your mission is to escape the evil Genron animal testing corporation. Spanx whips Redmond around, using the rabbit to pulverize enemies as his main weapon. When Redmond kills many enemies in a short amount of time, he will get hyper and start going nuts, dragging Spanx along while he clears everything in his path.

Aside from leveling up and swinging off of certain orbs, there aren't many variations to the gameplay. It could hold it's own for awhile if the level design wasn't so flawed. Many times objectives aren't anywhere near you and you will have to backtrack forever trying to find where you need to go. Aimlessly searching for this long really makes the fun factor take a sharp dive at times, to the point that you have to turn the game off and come back later.

That being said, the camera work is nice, providing a solid platforming experience nonetheless. The bosses and characters are wacky and angular, not pushing the pixel envelope by any means, but what's there is comical. The sound bites and narration are incredibly funny the first time around but not even its keen sense of comedy can burst through t he boredom or frustration you will get from backtracking.

When all is said and done, Whiplash will provide some laughs and some clever fun suited for a good weekend rental that could've been improved with better level layout.