There's Hilton's reputation as a party girl and her starring role in a sex tape that went from intimate to Internet. Richie, daughter of pop star Lionel Richie, had a legal run-in involving drugs.

"The Simple Life" itself sounds like a bit of mischief. The Fox reality series, starting at 7:30 p.m. CST Dec. 2, drops longtime pals Hilton and Richie into the lap of a Southern farm family.

CBS generated protests merely by proposing a reality series akin to "The Beverly Hillbillies," with a country family's adjustment to upscale urban life as a source of amusement.

Fox's twist on "Green Acres," the 1965-71 Eva Gabor-Eddie Albert sitcom in which a New York socialite reluctantly moves to the country with her husband, had similar potential for insulting rural America.

But the series, unlike its stars, need not worry about its reputation: It's nothing but fun.

What could have been a mean-spirited attack on homespun values turns out to be a lighthearted mockery of the rich. What red-blooded, average American with a mortgage could complain about that?

Watch Nicole and Paris jet to Altus, Ark., after a last-ditch shopping spree that includes a $1,500 designer dog carrier. Watch their faces fall as they realize they're staying in a modest country home that doesn't have room service or private bath.

And that's no chocolate mint on the bed -- it's a tick! (Cue horrified looks from Paris and Nicole.) 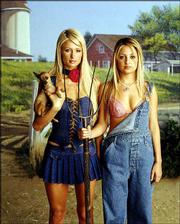 Paris Hilton, left, and Nicole Richie pose with Tinkerbelle in this undated publicity photo. The Fox reality series "The Simple Life," which begins Dec. 2, drops longtime pals Hilton and Richie into the lap of a Southern farm family.

See the young ladies traipse around the countryside in wildly inappropriate outfits. Watch Paris ponder the meaning of the following: Wal-Mart ("Is that where they sell wall stuff?"); a shopping list calling for "generic water" and the phrase "soup kitchen."

The rich, it seems, really are different from the rest of us.

Speculation aside, in this class warfare skirmish the children of privilege don't stand a chance. Their hosts, the Leding family, have on their side common sense, a work ethic and stability.

Besides parents Janet and Albert Leding, the household includes three boys (a fourth is in the military) and grandparents. Watching grandmom try to coax Hilton and Richie into plucking a chicken is worth the price of admission.

Richie's arrest shortly before filming was to start did not deter the family. She faced charges of drug possession and driving with a suspended license.

The much-discussed Hilton video didn't hit until after the series finished filming. For Hilton, the show's debut comes uncomfortably close to the scandal.

"It's put her a little on edge about the whole thing," executive producer Jonathan Murray said.