The (new) king of the sandbox

When KU graduate Andy Dierks moved back to Lawrence after four years living in Chicago, he thought he might find a corporate job that built upon his experience as recruiter for a leading consulting firm.

Instead, he ended up as the new general manager for a college radio station undergoing some of the biggest changes in its 28-year history.

"I saw the ad in the paper and sent in my resume," Dierks said. "I didn't really expect something like this to come along, but it did, and I'm really excited about it."

Dierks will assume leadership of Kansas University's KJHK (90.7 FM) this January, replacing decade-long general manager Gary Hawke. Dierks' appointment is the first step in the station's transition to the KU Memorial Unions, which will assume control of the station in January after nearly three decades of being run by the School of Journalism.

According to Hawke, who will remain in the J School to devote more time to student-run television station KUJH, the transition to the Union was the best-case scenario in a long line of alternatives that included selling the station's license, making it an Internet-only station or transferring ownership to Kansas Public Radio.

"Had it gone in a different direction I probably would have been leading the picket line," Hawke said. "I'm happy I didn't have to do that. I like having a job."

Dierks was selected from a pool of nearly a dozen applicants by a committee that included Hawke, KU Memorial Programs Director Leslie Heusted and student representatives from KJHK's executive staff and Student Senate. 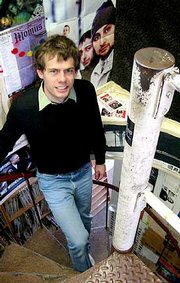 Dierks will enter the position with a history of leadership at KJHK. He spent a year as music director for the station and three-and-a-half years as a DJ prior to graduating in 1999. He also met his eventual wife, Erin Curtis-Dierks, while working at KJHK. Though Curtis-Dierks also applied for the general manager position, she said there were no competitive feelings between herself and her husband.

"We just threw our names in the hat and hoped for the best," Curtis-Dierks said. "I was very, very excited for him. We both love the station."

KJHK station manager Meredith Vacek, who participated in the selection committee, said Dierks was chosen because of his previous experience at the station and leadership experience as a recruiter for Chicago management consulting firm McKinsey & Company.

"His passion for the station and keeping it student-run was really evident when he came in," Vacek said.

Dierks will face a number of challenges in his first year on the job, such as getting acquainted with the technical aspects of running the station and meeting four "parameters" for the station's transfer set by the Unions' board of directors.

Those parameters include: (1) Serving the University community, (2) Developing a sizable audience of students, faculty and staff, (3) Moving towards self-sufficiency, and (4) Accommodating the needs of the journalism school's broadcasting classes and continuing to act as a lab for sports and news.

According to Dierks, there is still a lot of ambiguity surrounding those parameters.

"You ask 10 different people to define them and you get 10 different answers," he says. "I think part of our goal is going to be getting on the same page about what it means to increase the listening audience and what it means to achieve financial self-sufficiency, and those conversations haven't really started taking place."

Dierks' ideas for generating revenue included looking for more corporate sponsorships and seeking endowments from KJHK alumni. The station will also continue to receive funding from the Student Senate Media Fund, which has paid between 60 and 70 percent of the station's operating budget in recent years.

Leslie Heusted, programs director for the KU Memorial Unions, said the transition offered an opportunity to assess the KJHK's relationship with the community and survey listeners for input on how to improve the station.

"We're really excited about it," Heusted said. "The amount of dedication that the students have for the station indicates that this is going to be a great process."

Dierks indicated that he expected the station's programming -- a mix of underground rock, hip-hop and other music forms as well as sports, talk and news programs -- to remain much the same.

"I certainly don't want to dictate what type of music is played," Dierks said. "I would hope that the general listener wouldn't even know; that the programming would continue to be high quality student-run programming and a place where somebody who wants to hear something that they may not hear on commercial radio can tune in and find that." 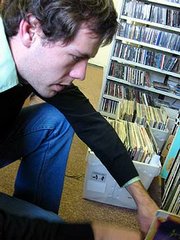 Hawke will help oversee the transition, meeting with Dierks and serving as an advisor until the station is running smoothly.

"I get more nostalgic as the time gets nearer," Hawke said. "I've met hundreds of students who have kept me young and got me into hip-hop."

"I feel like the station is in a great spot and we're turning it over to great leadership."