What happened to the hyped-up improvements we were supposed to get?

Counter-Strike finally comes to the home console in full form, but does it stand the test of time or up against modern Xbox Live games? 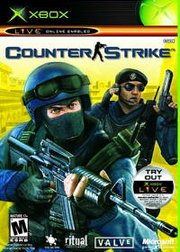 First of all, CS is the most popular online PC game in the world. Gamers are attracted to the teamwork aspect and the two main game modes. You can play as a terrorist or counter-terrorist in a protect/save-the-hostage mode or plant-the-bomb mode. Either way, you can't sustain many hits from gunfire, so your care and accuracy in playing weighs heavily on your success. If you die, you have to sit and watch until the game is over. If your team wins, you get more money to buy better weapons and armor for the next round.

Single player, a term used loosely, is limited to simple bot matches with foolhardy AI that constantly runs into walls and never moves and is dreadfully easy to overcome. Poor job, boys.

Despite having new maps from the forthcoming Condition Zero PC game, there is not much to bring PC addicts to the Xbox or to pull Xbox fans away from better online squad shooters like Rainbow Six 3. The gameplay translates impressively to the controller, but once you're used to it, there not much else to do besides play the same old game. You will get many other options of gameplay from other Xbox Live titles. There is no contest.

You will be immediately disappointed in the lack of effort to give CS a much needed facelift. Yes the graphics are improved, but fall way short of today's standards, especially given the auto-effect switches proprietary on in the Xbox hardware. The textures look like crap and the overall look is severely underwhelming. The animations are despicably poor. When someone dies, there are four frames of slow animation, literally. It looks like bad stop-animation from the first Terminator movie.

The sound is better, but still blah. Nothing really stops your heart or augments the intensity. The 5.1 surround is wonderfully separated though.

There is really not much to say about Counter Strike for Xbox other than you will have more fun with other online games. And online is the only place CS for Xbox would be worth anything.