The Kain series finds redemption in this refreshing edition

Eidos needs to commission Crystal Dynamics to do the next Tomb Raider. 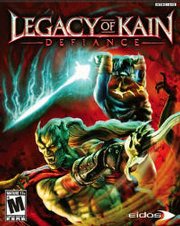 Legacy of Kain: Defiance is the game that fans of the series have been waiting for. With solid gameplay mechanics, perfect atmosphere and a story that answers many questions, Defiance is a surefire hit even for new fans.

Defiance allows you to play as both Kain and Raziel, alternating between different storylines that come together well in the end. But this time around, telekinesis revolutionizes the gameplay. Outside of the normal hack and slash style of play, you can suspend enemies in air, throw them against sharp objects or even throw them off ledges or into combat. This element is so refreshing and adds an immense amount of fun to the solid mechanic. Like many action games of today, you can learn new combos as you progress, deepening the play even more. Although Raziel has more puzzle elements specific to his game, both characters control similarly.

What sets Defiance apart from, say, Castlevania: Lament of Innocence, is its keen sense of purpose for the character and for the level layout. Each room and structure is inspired, with top-notch presentation oozing from every pore. Regardless of you are a fan of the series, you will be sucked into the lore and the jaw-dropping environments.

That being said, sometimes it may prove difficult to find enemies to fight while you're searching around for a door or gate. This breaks up the otherwise brilliant gameplay. Also annoying is the fixed camera system. While it has awesome cinematic quality and works often, many times it parks right behind a big foreground object, blocking the view of you and any action. The engine doesn't make the objects transparent as to see yourself, which is extremely frustrating. Locking on to someone may prove to be frustrating at times since the action is fast. You may want to lock on to the enemy in front of you when the lock feature just concentrates on the one to the right. Great games do have their flaws.

And hello voice acting! The speech and delivery in the story is superb. Not since Eternal Darkness have I been so riveted by the storyline and delivery. Grade A stuff.

Defiance has it's moments of boredom and frustration but the moments of fun and brilliance far outweigh the former. If you were disappointed by Castlevania like you should be, Defiance is your superior alternative this year.