Commando is a great addition to the failing platform genre

In the first Ratchet & Clank, we were all introduced to elements that overtook the tired platforming standbys. With a heavy focus on combat, variety of weapons and lengthy gameplay, R&C slightly rewrote a standard. 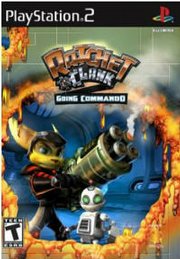 Enter R&C: Going Commando. Not only do you get more weapons, but you have incentive to use them instead of the perfectly-capable wrench the whole time. The more you use a certain weapon, the more chance you have to level-up, leading to upgrades and the eventual final gold upgrade, turning piddly firepower into gunplay that's amazing to watch and to use. You have a gaggle of rocket launchers, grenades, laser weapons and tons of firepower that keep the gunplay fresh throughout the lengthy quest.

The enemy difficulty is balanced almost perfectly. The more experience you get, the harder the new enemies are on the succeeding planet. Where most platformers underdeveloped enemy design, R&C:GC's enemies all seem to exist within their own bodies, functioning as a personality. Even the bosses have their own quirks, although the game does falter in providing many bosses to battle.

At first you will feel right at home with the controls because everything is basically the same. Even the presentation seems all too familiar. The effort in this past year was obviously spent on the brilliant level design and new features, and not to amp up or change the presentation.

Speaking of new features, there are "maxi games" throughout the game that give a great break in the action from space flying combat to roaming small spherical planets that are a treat to play in themselves. It would be worth your time to invest in these tangents in order to fully appreciate the differences between the first game and this.

The graphics haven't seemed to go anywhere, as the engine looks almost identical. This isn't necessarily a negative since the first Ratchet was slightly ahead of its time. Still, it would've been cool to see what more could've been done.

I am pleased to say this is a great game, a perfect addition to anyone's PS2 holiday list.