Cate Blanchett portrays a frontier mom in 1885 New Mexico forced to track her kidnapped daughter in "The Missing." 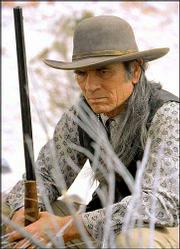