After the holiday rush is over and I get to play the games I actually want to play instead of just review, I will be revisiting Metal Arms several times.

You've always wanted to be a mysterious rogue robot fighting other droids on an alien planet haven't you? Even if you haven't, Metal Arms: Glitch in the System (MAGITS) provides a solid Halo-like control with one of the most fun multiplayer experiences this year. 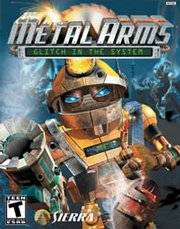 You are Glitch, a weird looking robot out to help your weaker robot cronies from being obliterated. Whatever. The story has tons of humor and never takes itself seriously. The heart of this game lies in the engrossing gameplay. You come across 17 wonderfully crafted weapons, each having its own personality. From the third person perspective, the game feels like a solid first-person shooter at heart.

I am happy to report that enemies actually jitter and gyrate when they are hit and then finally explode into pieces, giving the gamer purpose in the short term to actually kill the slew of baddies. You hunt items, solve puzzles and achieve other objectives among 40 missions throughout.

One of the most fun and compelling parts of MAGITS is hijacking different types of robots and vehicles and manipulating their specific abilities for your gain. This is the type of element that makes Glitch never get old, even though it could've survived on the creative weapons alone. The control feels very tight and responsive, although you may find it hard to aim correctly in intense battles no matter what sensitivity you have it on. The single player campaign never disappoints with its variety, but the multiplayer is incredible.

I've never had fun in a third-person perspective multiplayer deathmatch before, but MAGITS changed all that. With vehicles, possessable robots and interesting level designs, the seven multiplayer modes provide hours of mind-numbing fun. You won't have the same strategy-type heaven experienced in a Halo, but for mindless kill-or-be-killed, this is a great contender. Unfortunately the weapons prove to be designed more for the environment interactions in the single player mode more than their usefulness in the multiplayer, but still hold their own.

MAGITS has a unique style that is self-realized in all its glory. Great lighting effects and particle explosions make for satisfying gunplay. Many environments are slightly claustrophobic, but you won't be spending huge amounts of time in one area anyway, as the game is extremely fast-paced. It's a robot combat game with robot and metal-clashing sounds wonderfully separated in Dolby 5.1 on the Xbox and Pro Logic II on the PS2 and Gamecube. A fine job, indeed.

Metal Arms is another holiday sleeper, folks. You will see ads for bad games like Rising Sun, and next to nothing for diamonds in the rough like this. After the holiday rush is over and I get to play the games I actually want to play instead of just review, I will be revisiting Metal Arms several times.