There is nothing here particularly effective in pulling you away from the other basketball offerings this year.

Microsoft's basketball entry is a month late and excuses short of its paltry result. You would think the extra month of development would be used to more accurately represent players' abilities rather than estimating like the other games do since a month of the NBA has already passed. But no, the rosters are inexcusably out of date and other aspects really date it immediately since we've had awhile already to update our rosters on our other b-ball games. 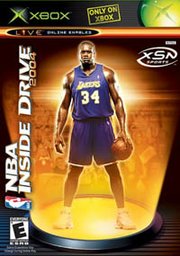 NBA Inside Drive hasn't moved much from last year in terms of gameplay, and seems to have taken prominent steps back in the graphic department. I say much because there is a shining improvement in the play calling. It goes the extra mile in using a deep playbook of plays you may assign to the D-pad.

However, once these plays are in motion, everything seems overly difficult to execute. Dunks won't happen when they obviously should, jump shots turn into hopping lay-ups, and the opponent AI seems to find impossible holes, encroaching on ignoring collision detection. It's this lack of polish that will turn the gamer off.

Your franchise mode is your standard fare, inspiring no such ambition to play this through versus the better offerings in NBA Live and ESPN NBA. Even online it does fare as well as ESPN NBA in terms of lag and fun factor.

And, well, the game is ugly. Animations are not up to par with its competitors, the overall look is ugly, and the commentary is limited and plain bad. It doesn't help that Microsoft could only secure the average talents in Kenny Smith, Kevin Calabro and Marques Johnson.

Nothing comes together well here, especially to pull you away from the other games, but it does remain competent in its own right.