Joelle Ford's art sometimes finds her when she's stopped looking for it.

The Lawrence artist's affinity for junk sends her scavenging for eye-catching items at antique malls, flea markets and garage sales. She snatches them up on the cheap and stows them in closets and corners until they speak to her.

"I collect things I think are interesting," she says. "I may not have a plan for them, but as long as you collect entertaining things and begin to put them together, I think that adds to the interest. You'll look at something, and it will just spark an idea, the object itself will. That's what makes it challenging to me is to figure out how to utilize these odd things that don't go together and try to incorporate them into a whole."

So it went with the quirky game table in Ford's living room. At first glance, it looks like a whacky modified card table, but if you dare grab the finial on top and lift, a wooden-peg game nestles inside what you might not recognize as a picture frame. In fact, about a dozen picture frames of descending sizes -- some lined in faux fur -- stack to form the table top. A Chinese checkerboard and a checker/chess set also have secret homes inside. Each of the four table legs came from a different piece of furniture, and some contain Ford's artistic embellishments.

"I like hidden things that you might not notice at first," she says. "I like to incorporate the viewers. There are drawers to open; there are things to move around. I don't want it to all just be laid out in the initial looking."

That's an open invitation to explore the work, which will be on display Wednesday through Dec. 23 in the small gallery at the Lawrence Arts Center, 940 N.H. Ford, who will show both functional and sculptural wood assemblages and paintings, will share the gallery with Lawrence wood sculptor Julian Harr. Their exhibit will run concurrently with "Out of the Woods," a showing of wood furniture, boxes, turnings and photographs in the adjoining Ann Evans Gallery.

Ford, who grew up in Orange, Texas, has been interested in art as long as she can remember. Though it wasn't taught at the schools she attended, her parents hired an art teacher to give Ford private lessons. She started an art degree in 1961 at Centenary College in Shreveport, La., but quit after getting married and having four daughters.

She exercised her creative impulses for years by sewing for her children and ultimately went back to school at Kansas University, where she studied under Nick Vaccarro and Phil Blackhurst. She earned her degree in 1998.

"I was determined to finish my degree," she says. "It gave credit to my work." 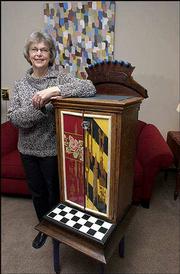 Joelle Ford creates whimsical furniture and assemblages out of mostly wooden odds and ends she scavenges at antique malls, flea markets and garage sales. She's pictured with a music cabinet constructed of parts from at least four different pieces of furniture, tiles, paint, fabric and wallpaper border. It and the painting behind her will be part of a show opening Wednesday at the Lawrence Arts Center.

Vaccarro introduced her to assemblage, which has fascinated her ever since. Vaccarro's influence comes through in Ford's paintings, too, with their often bold geometric patterns and vivid colors.

Her home reflects her whimsical nature. Just about every possible surface is painted, and her own paintings and sculptures brighten every room, including the toy room she keeps for her four grandchildren.

A box of recently acquired wooden piano hammers and metal pedals sits in her upstairs studio. She explains that her mother was a piano major and her father studied music and history and made part of his living with pianos.

"That's really where I learned to love wood," she says. "He would refinish pianos for money."

Ford generally doesn't sell her artwork, but she has shown it in Wichita, Topeka and Kansas City.

She continues to be fueled by her love of odd and ends and her propensity for piecing them into something that carries meaning for her.

"I like to take things that people cast off and try to create something functional or nonfunctional, something of beauty from them," she says. "I think beauty can be found in unexpected places."