Joe Chaney, a retired electrician who lives a few miles outside Linwood, enters the Linwood Cafe, 314 Main St., where owner Lianne Abare serves homestyle meals. Chaney ate lunch at the cafe on Thursday. Chaney, a regular at the cafe, said he ate there about twice a day.

Linwood — Every once in a while, it's good to step off the beaten path in your search for someplace new to eat.

And, for most people, the Linwood Cafe is off the beaten path.

Located in the town of Linwood about 12 miles northeast of Lawrence, the little restaurant has been dishing up hearty, Midwestern fare since 1951. Owned since 1994 by Lianne Abare (pronounced "ay-bare"), the 24-seat establishment is living proof that food need not be complicated, nor the surroundings impressive, for a meal to be satisfying.

The cafe will never be reviewed by a big-city restaurant critic, offer an extensive wine list or serve anything that you'd find on a menu in Tuscany.

The food is good, the atmosphere is strictly small town and your fellow diners are friendly. It just hits the spot.

Lianne Abare, owner of the Linwood Cafe in Linwood, displays part of the costume she wore to a recent Hawaiian-themed dinner at the restaurant. Every third Saturday of the month, Abare has a special dinner for customers. She had a luau, which featured shrimp and whole roasted hog, and drew about 65 customers.

Abare entered the restaurant business with a couple of years of experience running a catering operation, and later a bar called Puzzles in Olathe, in the early 1990s.

Abare is the third oldest sibling in a family of 12 children. She said she cooked a lot for her siblings and the experience has helped in the restaurant business.

"We still do hamburgers and cheeseburgers, but the quality, portions and selection is a lot better," Abare says, as she grills beef patties topped with slices of cheese in the restaurant's tiny kitchen.

"I think it's good food. I do some fancy stuff, but I usually save that for my third-Saturday-of-the-month theme parties."

Every month Abare comes up with a special, themed meal for her customers. Her themes have included: back to school, July Fourth, Halloween and Valentine's Day.

For the event -- which drew about 65 people -- Abare wore a grass skirt and a coconut-shell bikini top over her clothes.

Taco Thursday
Abare's philosophy of cooking is simple: She sticks with what she knows and doesn't stray too far from the tried and true.

What are her specialties?

"Definitely not Chinese. I suck at it," she says. "I'd rather go out and eat Chinese food. But I like my pork steaks and roast beef."

Every day there's a different special, and Taco Thursday always draws a crowd.

Joe Chaney, a retired electrician who lives a few miles outside Linwood, is a regular at the cafe. He eats there twice a day, breakfast and lunch.

"I usually have whatever their special is. It's the same people all the time, and you visit. Sometimes they get in some heated arguments, but I try to stay out of that," he says.

The menu's about what you'd expect. Breakfast offerings include eggs, bacon, biscuits and gravy, "pancakes and such." Then there are burgers and specialty sandwiches like grilled pork tenderloin, chicken breast and chicken-fried steak. Plus a couple of different salads. 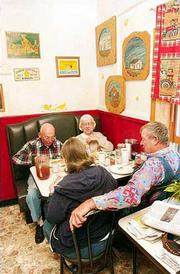 Walter and Mae Fern Smith, facing front, both of Bonner Springs, drive every Thursday to the Linwood Cafe for Taco Thursday. They sit across the table from their daughter and son-in-law Elaine and Dick Brauer.

Copies of the menu, which are kept in plastic-covered notebooks, feature pictures of the cafe through the decades.

Tom and Bertie Bray, who live on their son Michael Bray's dairy farm about five miles south of Lawrence, have eaten at the restaurant so long that they can tick off the names of its previous six to eight owners.

The retired couple lived near Linwood for 40 years, and they still consider it their hometown. The cafe, in their eyes, plays a vital role in the community.

"I'd say without it, a lot of old people would have to start cooking," Tom says. "It's just a gathering place. Lianne does put out a good meal, and everyone does know everyone," Bertie adds.

It's Bertie's art that graces the walls of the cafe: She paints Grandma Moses-esque rural scenes and town landmarks on the sides of old saws and the bottoms of skillets.

But her paintings aren't the only decorations in the cafe.

There also are small signs that say things like, "So this isn't home. Adjust," "I don't repeat gossip, so listen carefully," and "Today's menu: Take it or leave it."

Cheeseburgers and politics
How's the food?

Good -- good enough, in fact, to lure a vegetarian to break his vows and devour a cheeseburger stacked with cold, crispy lettuce, onions, pickles and a thick, juicy tomato slice.

Oh, and a heap of fries and an RC Cola.

But all around you -- it's Taco Thursday -- diners are enjoying platters heaped with tacos and burritos, obscured by mountains of shredded cheese.

Walter and Mae Fern Smith, both 90, drive to the cafe every Thursday from Bonner Springs to meet for a taco lunch with their son-in-law and daughter, Dick and Elaine Brauer. The Brauers are real estate appraisers who live on a farm three miles south of Linwood.

"It's a fun place to come, a good place to congregate and find out what's going on in the town," Elaine says.

"We cuss people that raise our taxes. Whoever's in power, we cuss 'em," he says. 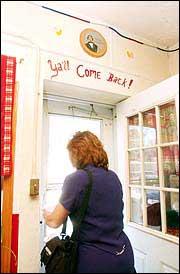 By noon, there's no place left to sit in the cafe. The eight stools along the counter are taken by husky men in work clothes, and all the parking spots outside are filled with pickup trucks.

A pair of older women are seated at one table, while a young family with children occupy one of the booths.

Abare moves among her customers, teasing, joking and laughing.

Why should a first-timer check out the Linwood Cafe? she asks.