If you're on a budget, you might want to consider that $15 paperweight on page 25 or a half of the moderately pricey Christmas ham on page 52.

But if you're among those filthy rich Neiman Marcus shoppers willing to spring for the $555,000 Tomahawk motorcycle with the V-10 engine on page 61, then you might also consider your very own half-acre landscape mural by Lawrence crop artist Stan Herd. You'll find that on page 53 of the new Neiman Marcus Christmas catalog. Starting price: $160,000. 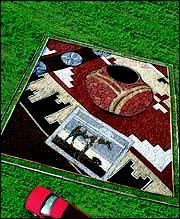 Dallas retailer-to-the-rich Neiman Marcus is arranging a special Christmas gift opportunity this year: "Art by the Half-Acre" by Lawrence landscape artist Stan Herd. Neiman Marcus commissioned this piece by Herd at John and Karen Pendleton's farm east of Lawrence to illustrate a page in its 2003 Christmas catalog. Prices start at $160,000.

The Texas retail firm, famous for designer apparel and outrageously expensive and unique gift items, is peddling Herd's "Art by the Half-Acre" in a full-page catalog spread unveiled Tuesday in Dallas.

The catalog entry offers to bring Herd to the location of your choice to create an original work of agricultural art customized to suit your soil, climate and interests.

Less-expensive but other over-the-top gifts in the catalog include a custom-designed mermaid suit complete with training in how to swim using its tail, a luxury ice-fishing house in Minnesota and a Neiman Marcus Limited Edition 2004 BMW 645Ci Coupe.

"Some of this stuff is a little highfalutin' for a farm boy from southwest Kansas," Herd said Tuesday by phone from Dallas, where Neiman Marcus unveiled the catalog to media. "Some of the stuff is just out of my realm of imagination."

Art by the Half-Acre

But Herd made no apology for being included in the catalog, which will be shipped to 1.8 million homes around the world.

"Years ago, I would have kind of looked down my nose because I have always said I think my work connects more with the common man than the art elite," he said. "But I'm 53 and I have a 12-year-old son at home, and I've decided money isn't a bad thing and you can do great things with it."

Keeping the deal a secret hasn't been easy. Herd spent a solid 14 days in July at John and Karen Pendleton's farm east of Lawrence creating the southwestern still life pictured on page 53 of the catalog.

The artist has done projects at the Pendletons' before -- most notably the corn mazes in recent years -- and it worked out that the family had a small section of field next to a 60-foot silo atop which Kansas University theater and film professor Kevin Willmott and student Kyle Hamrick could mount a camera to shoot time-lapse footage as Herd and assistants created the piece. The video, which included an interview with Herd, was shown during Tuesday's press event in Dallas.

Quite a few people knew about the project, Karen Pendleton said, but were all sworn to secrecy. The possibility that worried everyone most was that a curious airplane pilot might discover the project and release early photographs. The spot has earned a reputation for interesting bird's-eye views because of Herd's history there, and Neiman Marcus likes to keep its Christmas Book features hush-hush until they are officially unveiled.

But Herd managed to keep the news contained, and he destroyed the 50-foot by 50-foot example piece at Pendleton's as soon as it was documented.

Herd used only rocks and mulch for the example piece; Kansas in July would have been unforgiving to plants. But for the actual gifts, Herd would create a permanent work that incorporated hardscape, native perennials, herbs -- maybe even shrubs and trees.

"It could be for a corporate headquarters or for someone's back yard," Herd said. "It could be under the flight pattern for an airport."

Herd said he'd been chewing on the idea of offering his services through Neiman Marcus for nearly 15 years but had never pursued it. During a trip to New York this spring, he mentioned the idea to friend and business partner Scott Richardson, who, coincidentally, knew Tom Goodman at Goodman Media, the firm that handles public relations for Neiman Marcus. It didn't take long to interest the company in the plan.

'Genius of what Stan does'

Of course there's no guarantee anyone will buy the gift, but Herd is hopeful. An entourage of 15 to 20 people who have helped him on projects through the years would assist him on the commissions, should they start rolling in.

Even if they don't, some good things came from the experience -- like the time-lapse video shot at the Pendleton farm.

Artist Stan Herd, left, and Kansas University student Matthew Broderick construct an earthwork for the Neiman Marcus Christmas catalog. The earthwork was created this summer at the rural Lawrence farm of John and Karen Pendleton.

"The time lapse, I think, more than anything, may really kind of show you the kind of genius of what Stan does," Willmott said. "When you see the final thing, it's great, but it's really pretty amazing how he's able to take the earth and tools of the earth and sculpt this."

The nod from Neiman Marcus -- and the international exposure it offers -- has been a long time coming for Herd, Karen Pendleton said.

"I think it's great. I think Stan is very talented, and I'm just really pleased he's getting the recognition he deserves," she said. "We're really lucky to have him here."