Washington — When Pablo Picasso was 27, he spent the summer in a village in his native Spain, drawing and painting odd angles and curves that looked only a bit like his beautiful French mistress.

They ended up helping inspire the cubism that defined his career.

"When we invented cubism, we had no intention whatever of inventing cubism," he said many years later of the movement that moved far beyond the tradition of art that tried to reflect the world as it appeared to the human eye.

The National Gallery of Art has assembled 60 related sketches, drawings, paintings and sculptures for a show that opens today: "Picasso: the Cubist Portraits of Fernande Olivier." It will run through Jan. 18.

Trying to create an entirely new kind of painting, Picasso had been experimenting with geometric shapes. The pictures that resulted had less and less resemblance to realistic art though their subject was usually identifiable as a person or object.

As an introduction to the show, wall notes explain that mistress Fernande became "less a subject than a motif" and that Picasso sought more an "allegorical representation" than a likeness.

Jeffrey Weiss, exhibit curator, doesn't see the pictures as an attempt to portray a particular woman, as artists had been doing for centuries. Though a professional model, the "languorous, auburn-haired" Fernande -- as Picasso biographer John Richardson describes her -- apparently did not sit for them. In Fernande's many letters to Gertrude Stein, the American writer who was Picasso's patron, she complained that a kidney ailment was so painful that she could hardly sit at all.

Picasso usually put one or more of Fernande's characteristics into the pictures, such as the deep cleft between her nose and upper lip, or the bun that was her favored hairdo. 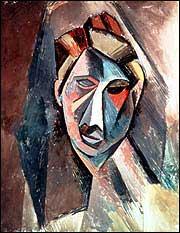 Pablo Picasso's portrait of Fernande Olivier, titled "Bust of a Woman," is among works for a show to premiere today. "Picasso: the Cubist Portraits of Fernande Olivier" will appear through Jan. 18 at the National Gallery of Art in Washington.