EA returns with the most complete game of golf you can literally get into.

I knew it was going to be great. I knew I would play it often. But I was not prepared for the amount of extras added that make this my favorite EA game of 2004. 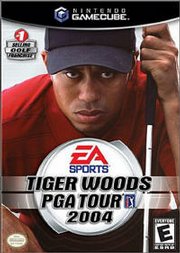 Tiger Woods 2004 joins the ranks of its predecessor as on of the best golf simulations ever. Using the intuitive analog control for backswing and stroke, controlling the power, controlling the spin and all other mechanics remain the same as they should. So you know right from the start you are guaranteed a great time.

One of the most impressive and downright scary modes is the Game Face mode. Here you can create, well, you. You can contort, twist, enlarge and reduce bones structures with over 50 different settings that you can make a likeness that looks like you. I mean REALLY looks like you. My roommate came in while I was playing and just pulled a Keanu Reeves "woah" when looking at my character model. He simply followed with a "that looks like you" to which I replied "I know" still in awe of the facial customizations.

When you view the entire body during gameplay it really is scary how much it looks like you. With the money you are earning in the several different modes, you can buy new animations from the Pro Shop to better fit how you would truly react to a bad or good situation. Also in the Pro Shop you can buy and unlock different hats, clothes, faces, hair styles and colors, clubs, sunglasses, better abilities and tons of other accessories to make this the most user customizable golf game ever.

There are new courses like Bethpage Black that are unlocked from the start for Tiger pros that want an immediate challenge. There are 19 courses in all and 15 PGA pros to choose from in addition to 12 faux characters.

The second big addition in PGA tour mode is the inclusion of real time events, allowing you to participate in a 52-week tour, moving through the ranks as theu would actually happen. Other new modes include Battle Golf, Stableford, Long Drive Shootout and Best Ball.

It is in the multiplayer modes that the most enjoyment is found playing friends or online with the PS2 version. Add the hilariously blunt commentary from David Feherty and Gary McCord and you have an awesome multiplayer experience ahead of you.

The graphics are gorgeous and ambitious in scope. All real courses have been recreated with utmost accuracy. Unfortunately none of the versions have widescreen of progressive scan support (despite Xbox's hardware enforced 480p). I'm puzzled to why EA hasn't provided the graphical support here that they do in Madden.

Despite my graphical demands, Tiger Woods leaves no facet of the game uncovered, leaving all competitors cowering in the shadows.