She starts with only a dozen colors. But through an extraordinarily precise measuring system, she's able to create a nearly infinite spectrum of variations to weave into her tapestries.

Her husband, classical guitarist Robert Bluestone, tinkers with color of a different sort. When he combines his nimble fingers with the frets and strings of his instrument, seemingly endless combinations of tone colors emerge.

If the two arts sound similar, it's because, in many ways, they are. It just took the couple a while to figure that out -- six years of marriage to be exact.

"We were trying to communicate the same thing," Rebecca says on the phone from the couple's home. "Robert was just doing it on the guitar, and I was doing it through my art pieces."

Converting that tension to meaningful art has become the goal of Woven Harmony, the couple's collaborative project that teams Robert's music with Rebecca's artwork in an intimate, multimedia stage show.

"It's an interplay between the visual imagery of my work, Robert's music, projected images that are evocative of where we're going with the work, and the two of us talking," Rebecca explains. "What people always feel like is that they have been invited into our lives for an evening." 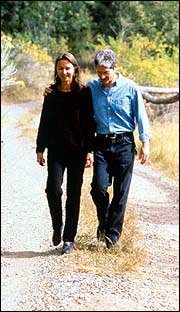 Robert and Rebecca Bluestone of Woven Harmony will perform at 7:30 p.m. Friday at the Lied Center.

Robert and Rebecca found their instruments of choice -- he the guitar, she the loom -- at different times in their lives. Robert started young. In fact, he was just 8 years old when he announced to his family that he wanted to play the guitar. He started classical lessons at 16.

"I have always felt that the guitar and I have had a great affinity for one another," Robert says. "Ever since I was a little boy, one of my great loves was Andres Segovia, the great Spanish classical guitarist. My interest in the guitar was not limited to just classical guitar. I also loved the Rolling Stones, so I could never figure out whether I wanted to be Keith Richards or Andres Segovia.

"From looking at Keith these days, I think I maybe made the right decision."

Robert tours regularly throughout the United States, Mexico, Australia, Canada and Central America. He received a master's degree in music from Eastern Michigan University and studied with Argentine guitarist Manuel Lopez Ramos at the Instituto del Arte Guitarristico in Mexico City. He became the first foreign virtuoso to join the staff there, and in 1979, he was awarded a full scholarship to study and perform at the Andres Segovia Master Class in Santiago de Compostela, Spain.

Rebecca didn't discover the loom until 1984, when she was in her early 30s. A local weaver where she lived, on the coast of Maine, needed someone to do her shipping and packing. Rebecca worked in exchange for weaving lessons.

"I sat down at the loom, and it was like I had come home," she recalls. "It was like I already knew how to do it, and I very quickly realized this is what I wanted to do the rest of my life ... I literally haven't done anything else since then."

"One way to think about my work is a canvas is woven and then a painter applies layers of paint to it. What I do is I apply layers of dye to the fibers and then weave the canvas," Rebecca says.

A baseline that informs many of her pieces is the Fibonacci sequence of numbers, a universal organizing principle that is ubiquitous in nature, down to the spiral in human DNA. The principle may rear its head, for example, in the number of shapes Rebecca chooses to include in a weaving. But the mathematical element is simply a jumping-off point; Rebecca says she lets intuition guide her at the loom.

"Weaving, once you learn the technique, is a very repetitive process," she says. "It puts you into this state that I call contemplative repetition. Because of the repetition and the rhythm of it, it puts you into a very right-brain, more inner, space."

Robert describes his approach to playing guitar in a similar way. He knows the music and has mastered the techniques, so he focuses more on expression.

"I need to get out of the way of the music," he says. "It's not about me. It's about being a channel that the music can flow through and being open to all the possibilities of the music and being the representative, in a way, of composers who haven't been there for a long time in some cases."

Robert and Rebecca met in 1986. She had traveled to Santa Fe to take a class from Hopi weaver Ramona Sakiestewa. She and Robert ended up at a dinner party thrown by a mutual friend who was also taking the class.

"We had one date, and that's pretty much it," Robert says.

"I never left Santa Fe," Rebecca adds. "Robert was teaching at the university level before that, and I had just been learning my art form. He started his touring career then, and I started my career as an artist. That was something that happened for us together."

Another life change the couple experience together inspired them to add a new component to their residency program. During a routine physical in 2001, doctors found a tumor on one of Rebecca's ovaries and, a few days later, diagnosed Stage One ovarian cancer. During surgery to remove the tumor, doctors also performed a hysterectomy.

Husband-wife duo Robert and Rebecca Bluestone combine his classical guitar playing with her handmade tapestries for their stage show, Woven Harmony. They'll perform at 7:30 p.m. Friday at the Lied Center.

Rebecca's mother died of breast cancer in 1986, and she described the feeling of taking care of her dying mother, growing closer to her, as a magical experience that put her in a "state of grace."

That and her own battle with cancer, she says, have focused her mission as an artist.

"What happens when you go through an experience like that is everything in the material world becomes immaterial because it's just not important anymore. It doesn't help you. What makes you feel better is other people's love and then feeling that you still have your spirit, even though everything else may be kind of falling away from you," she says.

"I started realizing very quickly into that process that my work wasn't so much about the object itself, about being an artist, as using my art as a way to communicate with people about the greater issues in life."

What she and Robert hope their artistic union conveys is that boundaries between visual art and music -- between all arts, for that matter -- are artificial and that creativity is paramount.

"Somebody very wise said that art is the expression of the experience of being human," Robert says. "What happened in the 20th century is that people got a little too specialized, and people thought, 'Well, we'll leave creativity to the artists.' But in fact what will define success for everyone in the 21st century is the degree to which they are creative in whatever they do. So we see the arts being relative to every form of human experience."