Struggling charity bookstore gets a boost from rock music

New York — With its plush, comfy armchairs and quiet that would make a library proud, Housing Works Used Book Cafe in Manhattan has been a reclusive reader's paradise for years.

So change was definitely in the air this January, when scruffy rock star Ryan Adams jumped on one of the store's tables and howled a blues tune to an audience of cheering, beer-drinking fans.

"That was such a knockout," said Alan Light, a music journalist and friend of Adams who organized the show. "He was so excited and happy and the right amount of drunk. No one who was at that show will ever forget it."

Adams' performance was the first in an unusual benefit series that has transformed the SoHo bookstore into a major moneymaker for its parent company, Housing Works Inc., an organization that helps homeless, HIV-positive people in New York City.

Since the series' inception earlier this year, each of the monthly concerts has raised between $5,000 and $7,000 for the organization. Performers, who have included Roseanne Cash, Edie Brickell and Fountains of Wayne, donate their time and all the proceeds from the $25 tickets to Housing Works.

'In the shadow of the thrifts'

That's a dramatic reversal in fortunes for the bookstore, which had struggled to meet its operating costs since opening in 1996. Even in good years, it generated only a fraction of the revenue made by Housing Works' flagship fund-raising operations: its clothing and furniture thrift stores.

The thrift stores' vintage wares -- ranging from 1950s sofas to polyester shirts -- have long been a favorite of budget-conscious New Yorkers. With four locations, the thrift shops contributed $8.2 million in fiscal 2003 toward Housing Works' $27.2 million budget.

"We were living in the shadow of the thrifts," bookstore manager Joel Tippie said. "Until about a year ago, there were constant grumblings from the ... board of directors that the bookstore model was not working in the way that the (thrift stores) have performed." 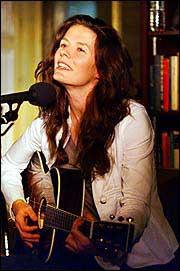 Edie Brickell performs a benefit concert at the Housing Works Used Book Cafe in New York. Housing Works Inc., a charity that provides services for homeless people with HIV, has raised between $5,000 and $7,000 per concert since the series' inception in January.

But the grumbling has all but ceased: The bookstore expects to end the year $20,000 ahead of budget. The extra money will help fund Housing Works' housing and job training programs, Tippie said.

Due to increased traffic through the mahogany-paneled store, book sales have risen by a third since the series started -- to $60,000 in May 2003 from $45,000 in May 2002, Tippie said. There's also been an increase in the number of people offering to work at the store, whose clerks are all volunteers, he said.

The concerts themselves are informal affairs that take place in the store's spacious in-house cafe, which has high ceilings and polished wood floors lined with folding chairs.

At a recent show, audience members sat silently as Brickell played on a small stage, only a few feet from the front-row seats. She performed new songs on an acoustic guitar, singing in the familiarly lazy voice that took her song, "What I Am," to the Top 10 in 1989.

"Her publicist thought this might be a good way to try the stuff out under the radar, without pressure," said Light, the series' curator and former editor-in-chief of Spin magazine. "This series is a good way to do that."

Brickell was preceded by two younger singer-songwriters, Josh Rouse and Erin McKeown, who each performed for about 30 minutes. A fuse blew out during McKeown's performance, silencing the amplifiers; she sipped tea and took questions from the audience while it was fixed.

"The sound is OK, nothing fantastic," said Rouse, who flew in from Nashville, Tenn., to perform. "But it's more about education, spreading the word."

"A lot of performers say, 'OK, an acoustic set, I'll do half an hour,"' said Light. "But then they're up there and the audiences are so rapturous -- all of a sudden they're taking requests for songs they haven't played in a long time."

Between performances, people leafed through the used and rare books and ordered beer, wine and sandwiches at the cozy cafe. Some ventured up a spiral staircase to the store's second floor, where nonfiction books are shelved.

The store sells everything from current best sellers to rare first editions. A first French edition of Robert Frank's "Les Americains," for example, recently fetched $2,750; a first edition of C.S. Lewis' "The Lion, the Witch and the Wardrobe" sold for $150.

"I heard about the show, and it brought me to the bookstore," said Alan Weinberg, 48, as he flipped through a book of photography. "I'm not much of a book buyer myself."

"I'd never heard of the store," said Chris Clark, 34, standing nearby. "I was trying to tell my girlfriend about it -- they raise money for people who can't afford to buy books or something?"

Confusion about the store's mission isn't necessarily a bad thing, said Jen Blustein, a member of the organization's board.

"People ask a lot of questions about the store at the concerts," she said. "You can tell they're new to it. But that's one of our purposes -- to bring new faces to the store, and to bring the purpose of Housing Works to a whole new group of people."