The painter from Maine.

There's something a bit misleading about the nickname Marsden Hartley bestowed upon himself at the end of his career. 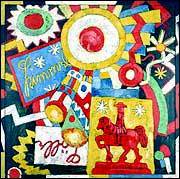 "Himmel" and the other works will be on exhibit at the Nelson-Atkins Museum of Art during the retrospective "Marsden Hartley (1877-1943): American Painter." The show opens Saturday at the museum and continues through Jan. 4. "Himmel" is part of the museum's permanent collection.

The 20th century American painter spent more time in Paris, Berlin, New York, Mexico, Bermuda and elsewhere than the placid Northeast state where he was born in 1877 to immigrant parents. But he returned there late in life and even incorporated the state's rugged landscapes into his work.

In between, his propensity for travel inspired a body of work as varied as the cultural landscapes he encountered, so much so that art historians tend to refer to his geographical periods rather than shifts in his artistic style.

"The style is hard to pin down," says Charles Eldredge, Kansas University distinguished professor of art history. "Yet even throughout ... there is something that seems consistently Hartley, whether it's his freedom with color, whether it's his sense of form and structure, whether it's his feeling for the natural world, a tendency to simplify and make monumental -- those generalizations seem to hold true for much of his work."

A Hartley retrospective -- the first in more than 20 years -- opens Saturday at the Nelson-Atkins Museum of Art in Kansas City, Mo. Eldredge is teaching a graduate seminar on the artist to coincide with the exhibition, "Marsden Hartley (1877-1943): American Painter," which features about 80 paintings and drawings by Hartley, whom Eldredge considers a favorite.

"I think he is, in his generation -- which was collectively a kind of greatest generation in the arts in terms of pioneering modernists in this country -- he was one of the most gifted and most consequential, most talented," he says.

"This is the first exhibition in a generation which has provided an opportunity to look in-depth at his work, in quantity at his work. And since it was coming 30 miles down the road, it seemed almost obligatory to take advantage of it and to devote the semester to studies of that period and to give the students a rare opportunity to see their subject in-depth."

Colored by constant movement, Hartley's work shifts from impressionistic views of Maine to abstractions made in Europe and New York to landscapes and still lifes created in New Mexico to views of Maine tourist attraction Mount Katahdin and the Northeast coastline. A difficult childhood -- Hartley's mother died when he was 8 years old -- motivated him toward self-education and intellectual life outside his native New England. World-changing events during his lifetime -- World Wars I and II and the Great Depression -- mirrored his restless spirit.

In the early 1900s, New York gallery owner and photographer Alfred Stieglitz handed Hartley his first solo gallery show in New York and sent him to live and paint in Europe in 1912. (Stieglitz also helped launch the careers of artists such as John Marin, Arthur Dove and Georgia O'Keefe, who later became his wife.)

"The Lighthouse" is being loaned from a private collection and is shown here courtesy of Martha Parrish and James Reinish Inc., New York.

The wartime death of Hartley's dear friend and possible lover Karl von Freyburg inspired him to create a series of paintings based on war motifs. (One of them, "Himmel," is part of the permanent collection at the Nelson.)

The series didn't win Hartley much popularity in America, Eldredge notes, when he showed them here in 1916.

"Germany was running roughshod over our allies in Western Europe," he says. "It was hardly a moment to be unveiling a body of important German-based work given the anti-German sentiments that were rampant at the time."

"The same sort of thing happened when he died in 1943, during the depths of World War II. The Museum of Modern Art did present a memorial show in 1944, but in the depth of wartime, there were other preoccupations which overshadowed that exhibition as well."

But those circumstances no longer overshadow the work of the self-described "painter from Maine," who returned to his home state at age 60 and died of heart failure in 1943. A substantial 1980 show at the Whitney Museum of Art in New York City launched a whole new generation of Hartley scholarship.

Lucky for us, Eldredge says, because Hartley left behind "extraordinary images that maintain their vitality."

"Like any artist, he had his good days and some not so good days," he says, "but his batting average was pretty swell."