Kansas University senior Falestine Afani Ruzik, co-founder of KU ScooterHawks, an officially recognized student group for scooter and mo-ped enthusiasts, enjoys an afternoon cruise on her 2003 Yamaha Zuma Sport Scooter. Lawrence residents both on and off campus are increasingly turning to scooters as a quick, convenient, environmentally friendly mode of transportation.

They weigh a couple of hundred pounds.

They get about 100 miles per gallon.

And they can fit in even the smallest of parking spaces.

Scooters, a diminutive form of transportation, are catching on big time in Lawrence these days.

Everyone from Kansas University students to college professors to pediatricians can be seen zipping around town on the sprightly, candy-colored two wheelers.

They're the perfect antidote in an era of hulking sport-utility vehicles. They're simple to use, highly economical and leave but the barest of imprints on the environment.

You can see her buzzing through Lawrence on a blue 2003 Yamaha Zuma Sport Scooter she bought for $2,500 in Topeka.

Though Ruzik also has a 1992 Pontiac Bonneville, the broadcast journalism major prefers getting around on her scooter.

"I love how they feel: the wind in my hair, the sound of a scooter buzzing along and the way you fly down the street," she says. "It's very therapeutic and calming."

She enjoys her scooter so much, in fact, that she and a friend co-founded the KU ScooterHawks, an officially recognized student group for scooter and moped enthusiasts.

Ruzik and Luke Middleton, 26, a research economist working for KU's Policy Research Institute, started the club this past summer. It has attracted about 10 people so far.

"Every week we get a new member or someone who's interested," she says.

But the undeniable appeal of scooters, while increasingly popular among college students, extends beyond campus.

For instance, there's Dr. Terry Riordan, a 51-year-old Lawrence pediatrician who recently received a red Kymco scooter from his wife as an early birthday gift.

"I use it every day I can," he says. "I took it to work 90 percent of the last month and a half. It's getting to the time of year that I'll stop using it when it's cold. But if I can just wear a jacket and gloves, I'll ride it."

Mike DeGraw is partly responsible for sparking the scooter boom in Lawrence.

The full-size scooters he offers range in weight from 175 to 235 pounds and feature two-cycle, oil-injected 49 cc engines making from four to seven and a half horsepower.

DeGraw's scooters -- made by Peugot, Kymco, Twist N' Go and Derbi -- have tubular steel frames, plastic-composite bodies and top out around 55 miles per hour.

DeGraw believes the popularity of scooters is on the rise, nationally and in Lawrence, too.

"People like the economy of them -- they get about 100 miles to the gallon -- the simplicity of them, because they're fully automatic, and the ability to park them just about anywhere. That's what people tell us. But the fun factor is the main thing," DeGraw says.

Marty Mosier, a Lawrence resident who is manager of Vespa Kansas City, a Vespa scooter dealership in Overland Park that opened in May, offers another perspective.

"They're just a hip machine. People (who buy scooters) envision themselves as having a freer lifestyle," he says.

Vespas -- the retro, steel-bodied Italian scooters made since 1946 -- have an appeal all their own.

They're forever linked in the public's mind to the 1953 film "Roman Holiday," starring a chic Audrey Hepburn and Gregory Peck, in which the pair tootle around Rome on a stylish Vespa.

"These scooters kind of sell themselves. People seek them out because of the history and the nostalgic nature of them," Mosier says.

Popular on the hill

The boom in scooters is particularly evident on KU's campus, where students, faculty and staff have discovered the ease and convenience they offer.

"I think they're exploding in popularity. A year ago, there were two or three on campus. I counted nine in front of Wescoe Hall the other week, and that's not uncommon. I know several people who've bought one," says Middleton, co-founder of the KU ScooterHawks.

"I work at KU, so I'm here everyday. The big advantage is to drive it on campus and park right in front of my building. When I drove a car, I had to park it far off in some residential neighborhood," he says. 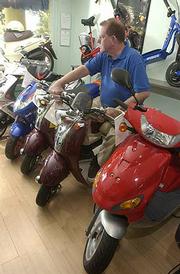 Mike Degraw owns Subsonic Scooters, 19 W. 19th Street, which sells a variety of European- and Asian-made scooters. His best sellers are made by Twist N' Go and Kymco.

"I live three blocks from campus, and I developed the 'KU calves' walking up the hill. But I really enjoy coming up here in the morning on my scooter. It's a nice feeling," she says.

"I like that I spend about $2.50 a month on gas. I fill up probably one or two times a month, and it's about $1.25 each time. I have meetings all over the campus, and I just jump on the scooter in front of my office in Wescoe and ride to the KU Visitors Center at 15th and Iowa in a few minutes."

Eodice also has a 1978 MGB convertible, but she rarely uses it these days, opting for her two-wheeled vehicle instead.

"I have a car because I couldn't figure out how to get my golf clubs on the scooter," she says. "That's the only reason I drive it."