St. Louis benefit concert from 1960s to be released

St. Louis — Fans of Frank Sinatra, Sammy Davis Jr. and Dean Martin may soon feel like raising their cocktail glasses to toast the Rat Pack: They'll be able to see rare footage of the legends, filmed in St. Louis.

A new DVD and CD collection, called "Live & Swingin': The Ultimate Rat Pack Collection," is scheduled for release by Reprise Oct. 14. The label says it's the only known Rat Pack concert footage from the 1960s.

"That it even existed was astonishing to me," said author Bill Zehme, who wrote "The Way You Wear Your Hat: Frank Sinatra and the Lost Art of Livin.'"

"They're real," he said, explaining the footage captures the vitality of the trio in live performance, something many fans may not have experienced in the past. "You either saw them in these dopey movies they made, although I did like 'Ocean's Eleven,' or in grainy footage."

The concert brings back to life a hopping Rat Pack performance along with a little St. Louis history.

The collection features crystal-clear film from a charity performance sponsored by the Teamsters union and benefiting Dismas House, a halfway house for men that still operates in St. Louis. The show was broadcast by closed circuit to audiences in theaters around the country. The show raised $300,000 for Dismas House, according to newspaper clippings from the time.

The current Dismas House director, John Flatley, said he was unaware of the DVD release. He said the house used to have footage from the concert, but it was loaned out several years ago and never returned. He questioned the ownership of the footage and said he planned to call a lawyer to look into the matter.

The Rat Pack show took place at the Kiel Opera House, a St. Louis great in its own right. 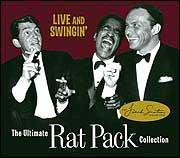 Dean Martin, Sammy Davis Jr. and Frank Sinatra appear on the cover of a new DVD and CD collection scheduled for release Oct. 14.

The show, billed back then as the Frank Sinatra Spectacular, provides a glimpse into the Rat Pack's magic. Dean Martin smokes cigarettes as he sings, sips from a glass, and wisecracks: "This is only a gag. I don't drink anymore. I freeze it, and eat it like a Popsicle."

Sammy Davis Jr. blows away the crowd by performing "One for the Road," while imitating just about every leading crooner he can think of, from Nat King Cole to Mel Torme. Davis has a little fun imitating Dean Martin, too. He pauses in his singing to pick up a glass, like Martin. "Which way is the audience, pallie?"

And then there's Sinatra, rolling imaginary dice on "Luck Be a Lady" and singing through offstage interruptions from Martin on "Please Be Kind."

"I think Sinatra's in fantastic form in this thing," said Zehme, who wrote the liner notes for the collection. "He was clearly enjoying himself while he was up there."