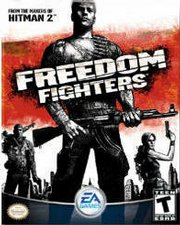 The first game that comes to mind for comparison is Brute Force for the Xbox. Brute Force had no self-realization and didn't believe in its world as much as it should have. Add in the awkward squad tactics and Brute Force was pretty blah. Freedom Fighters creates the war-torn NYC with bravery and fluidity. Your squad that you recruit isn't stupid and is actually rather intelligent. You will most likely start commanding all of them to go ahead of you to clear the path once you have more than five or six at your command. The more you play and kill, the more charisma you have. The more charisma you have, the more people want to fight with you.

Chris has certain missions to accomplish. Most of the missions are straight-forward even though there are several instances of "get this here to go here then get another thing there to get back here" scenarios. It all works pretty well. One difficulty is the auto aiming feature. Although it's pulled off decently, it would've been nice to aim for yourself. Especially when the easiest setting seems hard and you can't help but wonder if you could do a better job aiming.

The graphics aren't stunning, but they are wide in scope with impressive draw distances. The Xbox version runs in widescreen HDTV 720p, but the overall tone of the game still seems a bit muddy for its own good. You also get to control the camera, but way too much. There are clipping and ghosting issues when you take the camera for a manual spin. The camera functions should have been more polished.

The multiplayer mode is their version of capture the flag and it flat out boring. IT doesn't add to the replay value at all, which hurts the game a bit.