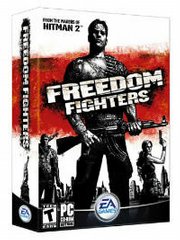 Freedom Fighters creates the war-torn NYC with bravery and fluidity. Your squad that you recruit isn't stupid and is actually rather intelligent. You will most likely start commanding all of them to go ahead of you to clear the path once you have more than five or six at your command. The more you play and kill, the more charisma you have. The more charisma you have, the more people want to fight with you.

Chris has certain missions to accomplish. Most of the missions are straight-forward even though there are several instances of "get this here to go here then get another thing there to get back here" scenarios. It all works pretty well. The PC version has a much better aiming system with the accuracy of the keyboard and mouse. The console versions hold your hand with auto aiming.

The graphics aren't stunning, but they are wide in scope with impressive draw distances. The overall tone of the game still seems a bit muddy for its own good, but is so much more colorful than its console counterparts.

There is no multiplayer mode, which hurts the game a bit. But if you play the console multiplayer, you won't care that it is absent from your PC version.