It's Microsoft's best platform game, but that's not saying much

Microsoft is trying harder and harder to break into different genres to create something equally as fun as Halo. For platformers, Blinx provided the first look at what Microsoft Games Studios could do. The results were marginal. In the event of Voodoo Vince, MG Studios betters Blinx, but still falls a little short of the platforming greatness of the Ratchet & Clanks and Mario's of the world. 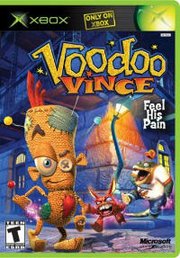 You are a voodoo doll named Vince in a voodoo shop in New Orleans. Vince is awakened by magic dust as his master Charlemane is kidnapped. It's up to Vince to save her by pummeling his enemies by hurting himself. This twist is the only way you can beat the bosses and mini-bosses, although regular enemies can be beaten with the few regular attacks known to Vince.

Here's an example of a voodoo attack: early on you encounter a giant pig who must be defeated to move through a door. Vince's pin to the head attack isn't magical enough to kill the pig but there is a hanging anvil nearby. You have to lure the pig out to make it step on the anvil lever, bringing it crashing down onto Vince. Vince is flattened, therefore the pig is flattened.

Completing the puzzles such as these are very rewarding and make the first time through the game very enjoyable, but there is no real reason to play again as the joy is in the discovery.

There are major camera issues as well. Vince will be strolling along a street in New Orleans and then all of the sudden Vince falls to his death. Why? The camera is too level with the ground that you won't be able to tell if there's a pitfall until it's too late. This is extremely annoying, happening so often as to detract from the overall fun factor.

The graphics are a fun representation of New Orleans-type settings with low-polygon enemies that fit the art style very well. It is a refreshing game to look at. The sound is great. Over-the-top voice acting mixed with a great sense of humor makes Vince fun to listen to.

If you can ignore the camera issues, which is difficult, you are left with a platforming novelty that lasts throughout the entire game but isn't enough of a breakthrough to be mimicked as the next big thing in 3-D platform games.