His own words through the open mics of NYC poetry cafes eventually landed him the lead role in SLAM, a Sundance- and Cannes-award winning film that he co-wrote. The film opened the door for albums of beat-laden poetry delivered in the rock-rap vein of Rage Against the Machine, worldwide tours, and several books including , said the shotgun to the head, released last month.

lawrence.com :: In your writing and in interviews, the "New Age" comes up a lot. What is the New Age?

Saul Williams :: It's quite literal actually. We're in a new millennium, a time when a paradigm shift is occurring from the powers that be to what I term as the powers of being. With New Age I don't mean the music you mediate to or, you know, the 'New Age' ideas. We are in a New Age. With that comes new technology, evolved levels of consciousness and understanding, a whole gamut of things that correspond to the times we're living in...

The art of this age is reflective of this age, and of course everything that existed beforehand. Musically, let's say, anyone you listen to -- take Bjrk or Radiohead, for instance -- there are ancient instruments in their music but there's also a great deal of digital music there. They're not trying to encapsulate the New Age. They are it. It's an amalgamation of mixed media.

Was that part of the reason that you've taken your art beyond what you're probably best known for, from poetry into hip-hop, electronic music, film ...

Partially, but it's not like I sat back and said OK, now I'm going to do this. But on the other hand, yeah that is why. Because we live in an age where people readily express themselves in a multiplicity of ways. I moved into music because there was music in me that needed to be expressed. Same thing with poetry. Film. Acting. I got to get it out, and I love the opportunity to share it.

You've said that you don't write poetry but live poetry. How's that?

I don't think poetry is necessarily in the writing. It is, and it isn't. The writing is reflective of perspective. It's the perspective and how that relates to one's level of understanding that brings the essence of a poem to life. I'm more interested in living through a beautiful moment than in describing it... It's a matter of going through the motions of life the same way you go through the emotions of poetry. It has to be lived first.

The introduction to ', said shotgun to the head' prepares you to read a love poem, but it's obviously much more than that ...

Yeah, I describe it as a love poem to all of the things that are decaying and destroying the values and ideals of the West. (laughs) ...Think about it -- when you're in a relationship, for most of us, it's really cool but on the other hand it kills the personality. You have to grow beyond your comfort zone. You have to grow to accept what the other person is into, you have to grow beyond yourself. So it kills the limitations of the self, necessarily so. It's a good thing in a relationship, you know? To be open to somebody else's interpretation can be a threat to your own and sometimes that's a good thing. Because you realize then that it's just an interpretation.

How does that apply to Western ideals?

Now look at 9-11, for instance. You might go 'Wow, that's a bad thing any way you look at it.' That's not necessarily the case. There's always something that sprouts from that. The book itself is an ode to the Hindu goddess Kali, the goddess of destruction AND creation. You have to destroy to create. It's a give and take, a yin and yang. When you construct a building, you have to destroy some of the earth's natural resources. But something new is created. 9-11 is a good example of that in many ways, for one because it woke up the American psyche ... 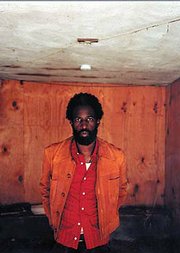 Even with Bush getting elected into office, as much as I don't like him, I was so excited when he got elected into office. Because I felt the underbelly of all the American values that I consider warped -- the imperialistic ones, the materialistic ones, the dog-eat-dog ones -- were surfacing. I see Bush and the current regime as a whitehead on a pimple. You know, when you have all these toxins inside and you're trying to get rid of the pimple and finally you get the whitehead. Yeah, that's the worst part. It's gross to look at. But you know that once the whitehead pops, the pimple's gone. It's the last stage. Bush is the whitehead. Unfortunately to get rid of the whitehead, there's always a little bit of bloodshed. But then we get to a toxin-free, unblemished reality.

I read a poet that there is not love without hate. The word should be lovehate. Lifedeath. Because the two balance each other out. And so to write a love poem of this magnitude I have to speak on the things that I didn't love. In order to let the love reign supreme.

What books have you been reading?

I've been reading a lot of stuff by Ken Wilber: A Brief History of Everything, A Theory of Everything, Spectrum of Consciousness, One Taste, Race and Grit; I've been reading the Bhagavad Gita; People Funny Boy, which is a biography of Lee "Scratch" Perry; I just read a novel, Songs of the Kings by Barry Unsworth; I'm always reading a lot of stuff...

Have you ever been to Lawrence? 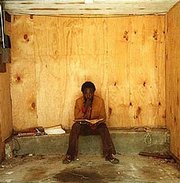 But you have toured the Midwest?

Yeah I've done lots of reading in the Midwest ... right now I think some of the most important movements and music and thoughts are coming out of the Midwest as far as the youth culture goes. In a lot of ways I think of a lot of these Midwestern cities or the conglomerate of the Midwest itself as the new Seattle.

Curious... Rollingstone referred to Lawrence as "the next Seattle" almost 10 years ago.

(laughs) Well, there you go.