Pittsburgh — Mister Rogers may have left a void in millions of lives when he died but Mrs. Rogers hopes a new collection of his plainspoken wisdom will provide comfort to them as it did for her.

Joanne Rogers says "The World According to Mister Rogers: Important Things to Remember," from Hyperion Books, was published for people who grew up watching Fred Rogers' public television show. It serves as testament to his timeless message of love, friendship and respect.

"Most of the people who read this book will feel as if they're having a visit with him. I do, and I think that's why I cherish it so," Mrs. Rogers said.

Culled from years of commencement speeches, songs, writings and interviews, the new book contains words of courage and inspiration -- simple statements that made Mister Rogers a household name. At least one passage was pulled from a public service announcement that aired after the Sept. 11, 2001, terrorist attacks.

One sentence reads: "I'm convinced that when we help our children find healthy ways of dealing with their feelings -- ways that don't hurt them or anyone else -- we're helping to make our world a safer, better place."

For more than three decades, the public television show "Mister Rogers' Neighborhood" taught millions of young viewers about love and to feel more secure about the world. Decked in his zip-up cardigan and sneakers, he became a friend to children and a mentor to parents.

Unlike his previous songbooks for children and parenting guides, the new book has a broader appeal.

"It's not a book for children ... but a book for people who had watched the show over the years -- grown-up children who were familiar with his program and who knew him," Joanne Rogers said.

Proceeds from the book sale will go to The Fred Rogers Fund, which promotes children's development.

The very private Rogers wrote the forward for her late husband's book, recounting how they met at Rollins College in Winter Park, Fla., where the two played piano.

"Our friendship was extremely important to our relationship and I miss that," Rogers said, "but on the other hand, he's everywhere."

Rogers uses three words to describe her husband -- courage, love and discipline -- which inspired editors to bundle his work into those three themes. The book's messages keep her company. She even uses paper clips to mark her favorite quotes in her copy of the final proof.

"If they had written it just for me, it would have been the best gift I could have ever had," she said. "I'm very grateful for it. I'll be interested to see how it's received." 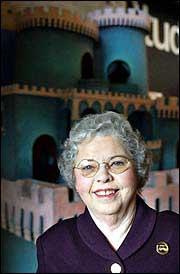 Joanne Rogers, the widow of Fred Rogers, the late host of "Mr. Rogers' Neighborhood" public television program, stands in front of one of the props from the show in Pittsburgh. Rogers said a new book, "The World According to Mister Rogers: Important Things to Remember," due out today, was published for people who grew up watching Mr. Rogers' show.