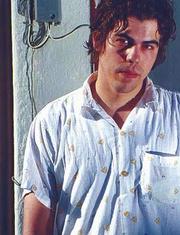 In the mid-'90s, Matt Suggs was a fixture on the Lawrence music scene. With his critically-acclaimed band Butterglory, Suggs released four albums for indie super-label Merge and spent the better part of his life on the road with bands like Superchunk, Archers of Loaf and The Wedding Present.

But when Butterglory disbanded in 1997, Suggs surprised many of his friends and fans by bolting from Lawrence and moving back to his childhood home in Visalia, CA. His decision was partly due to a breakup with his girlfriend and long-time recording partner in Butterglory, Debby Vander Wall.

"Me and Debby had been together for awhile and we broke up and I just felt like, 'OK it's time to leave,'" Suggs said. "I just wanted to get out of Lawrence into a safe spot where I could kind of recollect my thoughts. I fell back to the womb I guess; back to mommy and daddy."

At the time, Suggs wasn't sure if he would ever record music again. He took a kitchen job at a local restaurant and worked at pulling himself out of a self-described "funk."

"When you go through a major life change you question a lot of things," he said. "The mind just kind of shuts off and you sit around and wallow in depression for awhile. I think it does you a lot of good to go through something like that. It puts things in perspective."

But the lure of writing and recording music eventually called Suggs back. In 2000, he gathered up some old friends, including former Butterglory bassist Stephen Naron, and recorded his first solo record, "Golden Days Before They End."

"It kind of lifted me out of what I was dealing with," he says. "I guess it's just something I do. It's just in me."

Thee Higher Butterglory
For the last week, Suggs has been laid up in Fayetteville (AR) rehearsing for an upcoming tour to promote his second solo record, "Amigo Row." (The Razorback village represents a halfway point between California and Brooklyn, where two of Suggs' band mates -- drummer John Anderson and guitarist/keyboardist Zach Holland -- reside.)

When Suggs called Anderson about playing on "Amigo Row," all he was hoping for was a drummer. Instead, Anderson offered the entirety of his band, Thee Higher Burning Fire, which also includes bassist Raymond Morin and guitarist/pianist Than Kinsey. The pairing turned out to perfect fit, with THBF playing Crazy Horse to Suggs' Neil Young-inspired balladry.

"They took the music to a point that I would have never gotten to on my own," Suggs said. "I'm not much of a musician to be honest. I'm pretty limited, even on guitar. I've been playing the thing 20 years and I can barely find my way around it."

"I get it all the time," says Suggs. "I think it's coincidental. I'm a huge Kinks fan but I've never consciously modeled my voice after Ray Davies. I mean -- don't me wrong -- some of those Kinks records are some of my favorite records. But personally I don't see it."

Hannah and Janie
Lyrically, "Amigo Row" is Suggs' most honest work to date. On "The Unbeliever's Waltz," he describes coming to terms with the end of a relationship: "Just remember how you felt before you knew me / Well it's the same way you'll feel when I'm gone."

"I was consciously making an effort to write more directly," Suggs said. "It's easy to hide in ambiguous lyrics and flowery language 'cause you can just make it sound cool and no one really knows what it means. (Writing directly) makes me kind of nervous 'cause I feel like maybe I'm writing cheesy stuff or it'll come off as disingenuous or something. I had a lot of anxieties about some of them."

Suggs excels at painting detailed portraits of fictional characters, acquainting listeners with the likes of "Hannah," "Janie," and "Jonathan Montgomery."

"It seems to happen in a lot of my songs." Suggs said. "They're more than likely the same person."

Even though he's a thousand miles removed from Lawrence, the town still figures prominently into Suggs' stories. On "The Unbelievers Waltz" he sings: "You won't believe what they're saying / I had to ask if it was true what I heard / At the bus stops and the coffee shops on Massachusetts Street / And from the cashier at the Quick Stop on 23rd."

"That just kind of happened by accident," Suggs said. "I'll write stuff like that and it'll make me laugh. But then you sing it in a heartfelt voice and people take it seriously."

Row, row, row your van
With a full band behind him and rave reviews coming in for "Amigo Row," Suggs may finally have established his name as a solo artist. He rarely performs -- or even listens to -- Butterglory songs.

"Have you ever looked at old pictures of yourself from high school and you're like, 'Oh God'?" Suggs said. "It's kind of like that. I have a hard time even relating to the person that was making that."

Suggs and THBF are in the middle of a three-week tour to promote the album. The band just completed seven dates with Bloomington (IN) folk-rocker Songs: Ohia and will hook up with Beulah and John Vanderslice for the final leg of the tour.

"I don't really want to slack off like I did last time," Suggs said. "But it wasn't so much slacking as I kind of got in a financial quandary. In other words, I was dead broke."

Thursday's show at the Replay Lounge will be Suggs' first Lawrence show in three years.

"I still love to visit but I don't think I could ever move back," he said. "Lawrence is like a home away from home for me. I lived there for five years and made a lot of good friends. But yeah, I get mixed feelings. Definitely."