Bonus disc to include demos of Mario Kart, Star Wars

Marking the next big step in its marketing strategy, Nintendo is devoting $10 million to Mario Kart: Double Dash. Those who pre-order the game will get a bonus disc with several playable demos. 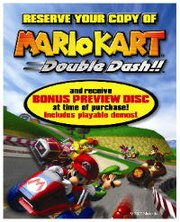 "Mario Kart has been one of best-selling franchises in Nintendo's history, selling more than 20 million units worldwide during the last 11 years," says George Harrison, Nintendo of America's senior vice president for marketing and corporate communications. "The latest version, Mario Kart: Double Dash!!, arrives just in time for the holiday season and is anticipated to be one of the hottest titles of the year."