NBA Jam returns to sing a tune that's all too familiar

Acclaim unearths the wildly popular 90's arcade franchise, NBA Jam, with this updated version for 2003. While looking a bit better than its decade-old predecessor, there's not much it has that competes with its competition, mainly NBA Street Vol. 2. 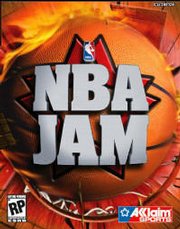 You can pick three players from the limited roster of real NBA teams, just like the older version. The player faces are more caricature than anything but still lack true evidence of aiming for the player's likeness. You may also create your own player with the general create-a-player mode, stacking up your attributes as you move along, but it's the same old song done with an average voice.

There's not much to write about the gameplay. Shoot. Pass. Turbo. Dunk. Same as it was a decade ago. The only new gameplay edition is the inclusion of hotspots where you can jump from great distances when you are on fire. But after an hour of playing, the announcer repeats himself and you've seen all the dunks. There is little to come back to.

There is an overall dull feel to the look of the game. The animations make marionettes look more alive. Plus, there is not a great sense of intensity to any of the effects.