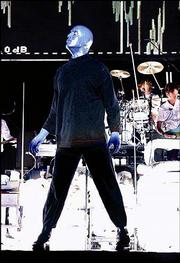 For those who think rock has gotten too predictable, Blue Man Group has a 'Complex' response. The bald-headed, blue-skinned trio has always mixed music into their wordless, performance art pieces. But on the Complex Rock Tour, the iconic troupe embarks on a fresh mission by amplifying its show.

"A rock concert is one of our oldest modern rituals," says Tom Galassi, a Blue Man Group member who will appear Saturday at Kansas City's Starlight Theatre.

"What the Blue Men are doing is breaking down the cliches and standard things that happen at a rock show and scientifically asking the audience to go through them with us ... We say it's sort of a play about a rock show, but at the same time it's this HUGE ROCK SHOW."

Backed by a nine-piece band, the concert is also augmented by guest shots from alt-rock songstress Tracy Bonham and dream pop trio Venus Hum. The post-modern, Euro-tech material is culled from Blue Man Group's latest album, "The Complex," which features contributions by these artists as well as guest vocals by such heavyweights as Dave Matthews and Gavin Rossdale.

For their own part, the Blue Men manipulate even more freakish percussive devices that have become their visual and audio trademark.

"We've always had the PVC (polyvinyl chloride) instruments in the theater shows. But the tour has some instruments that are specific to it," says Galassi, calling from Denver while preparing for an evening performance. "We also use these 'backpack tubulums' in the show because it's a way for the Blue Men to play PVCs without standing still. It's kind of like a wireless electric guitar."

Other implements include a "piano smasher," which is a grand piano turned on its side, exposing strings that are hit with an oversized mallet. But probably the most unusual items are the "air poles," which are fiberglass boat antennas of different lengths.

"They kind of sound like a DJ scratching a record," he describes.

Though Galassi is trained as a drummer, he's found some of these contraptions enormously difficult to master.

A Blue Man Group member jams on one of the act's many unusual percussion devices, backed by a live band on the Complex Rock Tour.

"The PVCs (are hardest to play), because they don't make any sense," he says. "They have to be arranged in a certain way, because of the lengths, to wrap around and make a sculpture. So it's not like it goes from high to low or this note to that note; it's a pretty random setting."

One of the most unusual aspects of Blue Man Group -- and one that has drawn criticism within the art community -- is the method with which the ensemble has expanded its ranks.

For this tour, Galassi is one of four Blue Men who rotate off-nights during each performance. But while this is going on, three permanent shows are also happening in four different cities: New York (where it originated), Boston, Chicago and Las Vegas.

What started in 1987 as the brainchild of founders Matt Goldman, Phil Stanton and Chris Wink has since swelled exponentially. Blue Man Group Productions employs 38 Blue Men, with a total of nearly 500 employees. Now the original three no longer perform, instead serving as executive producers for all the company's endeavors.

So does that mean Blue Man Group is a franchise, like Gallagher or Burger King?

"Do you think I would answer yes to that?" he responds with a laugh. "If by franchise you mean that there's more than one sit-down show, then yeah, maybe. It's not like these guys sit in thrones and bark down orders and we just do it. The cool part of this job -- and the reason I can do it for five or six years -- is because I do feel like I have some kind of input into it."

Galassi -- who is a full-time member of the Chicago stage production -- claims that this tour affords him all kinds of opportunity for creative contribution.

"I don't think it's any different than an actor being in a movie that somebody else wrote," he says. "He didn't write the character, but he creates the character. My character is not told what to do. We actually had this interview with a woman in Canada (Sarah Hampson of the Toronto Globe and Mail) who came with that angle. She was actually pretty mean about it. We were explaining it to her honestly and she wrote an article about how we were all brainwashed.

"Maybe the difference between us and a Burger King is the amount of things we turn down that would probably make a lot of cash but ruin the project. For instance, any time that an advertising agency sees a product that is blue, they ask the 'wacky Blue Men' if we want to sell this. Of course, the answer is no. That probably happens three or four times a week."

Galassi first auditioned for Blue Man Group six years ago at an open call. According to the organization's materials, only one in every 2,500 applicants earns a spot among the four ongoing theater productions. Even then it may take months as an understudy before being allowed to wear the mask in front of an audience. 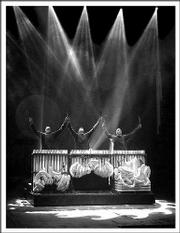 Members of Blue Man Group loom over one of their specially constructed PVC percussion instruments while in concert.

So what does it take to become a Blue Man?

For The Complex Rock Tour, one member from each of the four city productions was selected for the honor. The trio of originators came in with musical material and character pieces then spent "a grueling month and a half working that stuff out," according to Galassi.

While the tour (which runs through November) has been selling out and garnering glowing reviews, not every show has gone silky smooth for Galassi. In fact at one early gig the Blue Man started turning green.

"I threw up in front of all these thousands of people," the 27-year-old recalls. "I had chugged a pint of Gatorade when I got a chance to go behind the instruments. I came out with my fiberglass boat antenna and swished it around. At the end of the show we jump up and down to the beat for about a minute. So I'm jumping and I feel my stomach twist and all this Gatorade flew out of my mouth. The band just sort of looked at me. They didn't know if I was holding it in my mouth and just playing a joke. I was like, 'That's pretty rock and roll.'"

Although the pervasive image of the Blue Man trio (whoever the members might be) has become imbedded in pop culture, Galassi divulges that very little goes into the actual makeup and costuming process. In fact, it's rather simplistic.

This fundamental look of the group compels viewers to constantly bombard Galassi with one particular concern:

"It's kind of a fun question, but it's one that there's no answer to, ironically. It was kind of a gut feeling when these guys were messing around with makeup and bald caps. It was pleasing. We should make up a good story for why blue -- something really complicated involving nightmares and drugs. But there's just no answer to it."