Tarantino slashes his way back to top

'Kill Bill -- Vol. 1' is a dazzling but gory exercise in action filmmaking 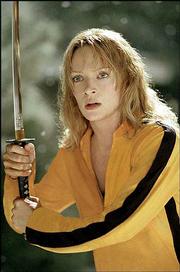 The adage is emblematic of "Kill Bill -- Vol. 1," because no revenge movie has ever been told in less of a straight line than this.

After a six-year absence from writing and directing, celluloid maestro Quentin Tarantino returns with a limb-hacking, blood-spewing, epic tale of revenge that utilizes every cinematic trick in his formidable arsenal. From employing non-linear chronology to filming a good chunk of the picture in Japanese to presenting an entire flashback sequence as anime, Tarantino manipulates the screen with a skill few others can match.

This should squash rumors that the 40-year-old filmmaker responsible for such seminal classics as "Pulp Fiction" and "Reservoir Dogs" has lost his touch.

"Kill Bill -- Vol. 1" (the second half will be released Feb. 20) is a tribute to the Hong Kong "grindhouse" films, Japanese samurai flicks and spaghetti westerns that Tarantino adored during his formative years -- just as "Raiders of the Lost Ark" was to the Saturday morning serials of George Lucas and Steven Spielberg's youth. And just like "Raiders," Tarantino plucks all the best things from these genres and crams them into one ultimate package.

This is an audaciously entertaining movie, despite the fact that it has little to offer in the way of "substance." There are no societal issues or political concerns addressed here; it's merely a vivid canvas upon which Tarantino can splatter his every whim.

What plot there is in "Kill Bill" remains even more simplistic because so many of the specific details aren't yet revealed in this first installment. But what's known is that Thurman plays an estranged member of the Deadly Viper Assassination Squad (DIVAS) who is under the leadership of a Charlie Townsend-esque leader named Bill (David Carradine). After Thurman's pregnant character is gunned down at the altar -- along with the wedding party -- and left for dead by her former allies, she recovers and goes on a mission to hunt and slay the offenders.

"I have vermin to kill," she explains.

Among the targets are Vernita Green (Vivica A. Fox), who is now enjoying life as a suburban housewife; O-Ren Ishi (Lucy Liu), who has risen to the head of organized crime in Japan; the one-eyed Elle Driver (Daryl Hannah) and brooding Budd (Michael Madsen).

And, of course, there's Bill.

"Vol. 1" only concerns itself with the retribution inflicted upon Vernita and O-Ren, and the latter battle represents the film's intoxicatingly gory centerpiece. In a finale that took eight weeks to shoot ("Pulp Fiction" only took 10 weeks total), Thurman faces down a whopping 88 opponents. Armed with her samurai sword and dressed in the yellow jumpsuit that is a re-creation of Bruce Lee's in "Game of Death," the 6-foot actress slices and dices her way through a legion of limbs. It's like the Black Knight scene from "Monty Python and the Holy Grail" ad infinitum.

That this segment doesn't come across as repulsive or psychotic is a tribute to Tarantino, who orchestrates it with such energy, wit and precision that it plays more like a hyper-stylized ballet.

After a six-year absence, writer-director Quentin Tarantino returns with a limb-hacking, blood-spewing, epic tale of revenge that utilizes every cinematic trick in his formidable arsenal. The result is a giddy tribute to the Hong Kong "grindhouse" films and Japanese samurai flicks Tarantino adored during his formative years.

One scene in particular is emblematic of this. It features O-Ren and her bodyguards simply walking down the hallway of a restaurant. Dressed in a white kimono, the smugly smiling Liu leads the entourage, flanked by indelible characters with names such as Sofie Fatale (Julie Dreyfus) and Go Go Yubari (Chiaki Kuriyama). Run in slow motion and buoyed by a drum-heavy techno riff on the soundtrack, the crew appears so formidable, so untouchable.

The innocent act of taking a stroll wordlessly sets the combative mood for the blood-stained showdown that will soon follow.